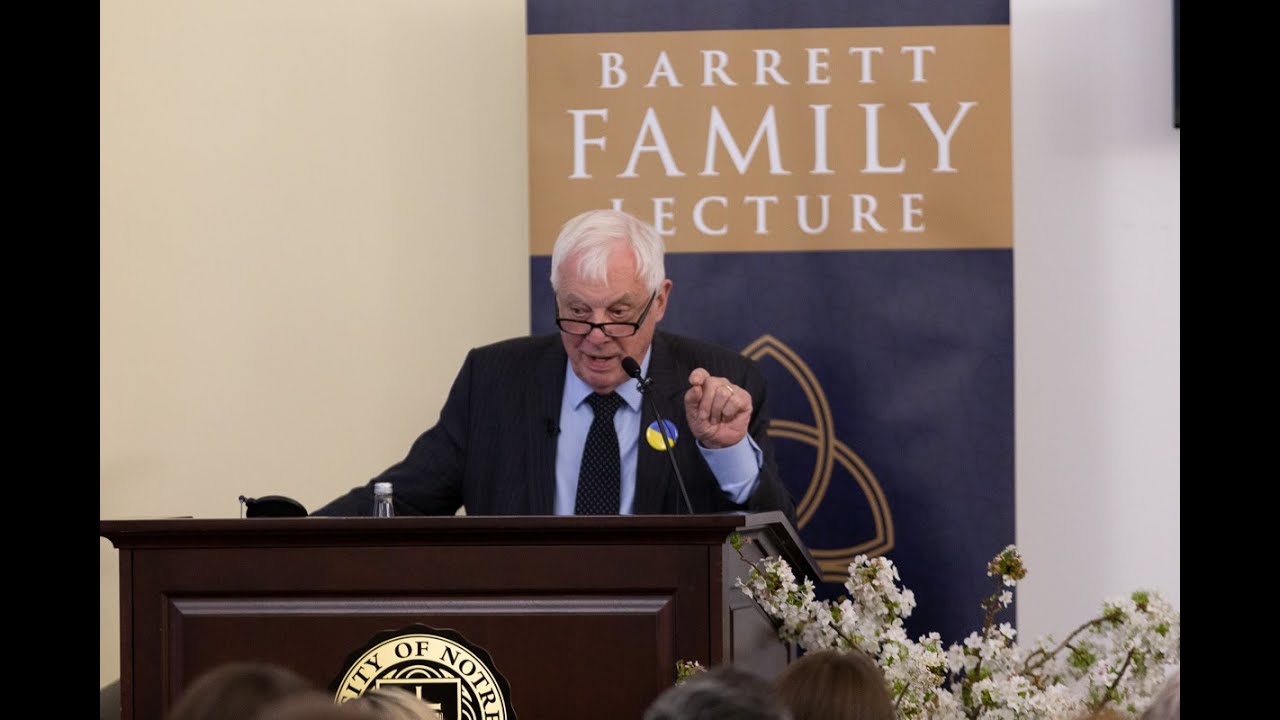 Chris Patten, Lord Patten of Barnes, delivered the 2022 Barrett Family Lecture, entitled “Is There a New World Order?” at the Notre Dame London Global Gateway. Since the Second World War, the international rule book has to a great extent been written by the United States and the world’s liberal democracies. In his lecture, Lord Patten considered how this status quo has been affected by the economic rise of China and its assault on international norms of behavior.

The Barrett Family Lecture Series was established through the generous support of R. Stephen and Ruth Barrett. The initiative brings prominent leaders in the areas of business, politics, and the arts to the University of Notre Dame’s Global Gateway facilities in Dublin and London to share their views on issues of major importance to the understanding of contemporary Europe with Notre Dame students and the wider community.

Patten has been the Chancellor of the University of Oxford since 2003. Born and raised in London, he graduated from Balliol College, Oxford in 1965 before embarking on a long career in politics, diplomacy, and foreign service. Patten was first elected Member of Parliament for Bath in 1979 as a member of the Conservative Party. He was appointed Secretary of State for the Environment by Prime Minister Margaret Thatcher in 1989 and became Chairman of the Conservative Party in 1990. Between 1992 and 1997, he served as the last British governor of Hong Kong, overseeing its transfer to China. Since then, he led the Independent Commission on Policing for Northern Ireland (1998-1999), was European Commissioner for External Relations (1999-2004), and was Chairman of the BBC Trust (2011-2014). He is the author of several books, including Cousins and Strangers: America, Britain, and Europe in a New Century (2006) and East and West: The Last Governor of Hong Kong on Power Freedom and the Future (1998).

During his visit to the Notre Dame London Global Gateway, Lord Patten also spoke to Felipe Fernández-Armesto, the William P. Reynolds Professor of History at the University of Notre Dame. This podcast captures their conversation, which focused on the subject of Lord Patten’s lecture, his experience as a politician and diplomat, and his views on recent developments in a troubled world.