Film Documentary Screening: The Silence of Others (2018)
Monday, October 7, 2019, 4:15PM, Andrews Auditorium, Institute for Social Concerns, B001 Geddes Hall,
Screening to be Followed by a Q&A with the filmmaker, Almudena Carracedo, moderated by Professor Pedro A. Aguilera-Mellado.
El Silencio de Otros/The Silence of Others (2018), Goya award winner for best documentary feature in 2019, reveals the epic struggle of victims of Spain’s 40-year dictatorship under General Franco, who continue to see justice to this day. Filmed over six years, the film follows victims and survivors as they organize the groundbreaking “Argentine Lawsuit” and fight a state-imposed amnesia of crimes against humanity, in a country still divided four decades into democracy.  Official Website here  |  Official Trailer here

The screening will be part of the course “ROSP 40457: Cinema of Spain” and it is a free event and open to the public: please distribute widely. 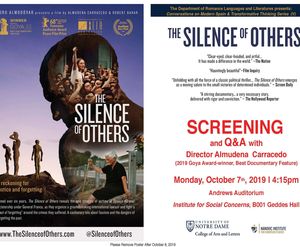 Cosponsored by the Nanovic Institute for European Studies, Keough School of Global Affairs.