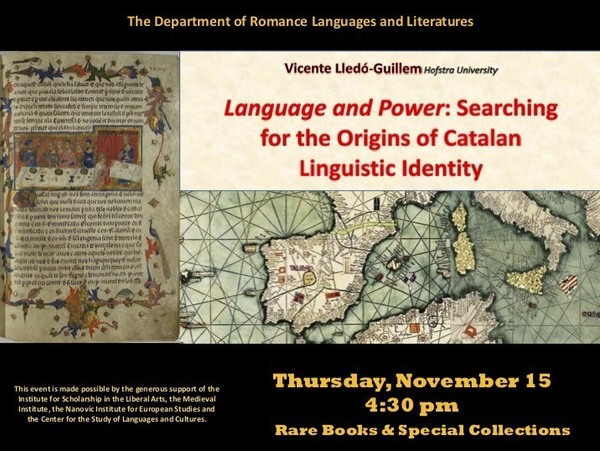 This presentation is based on Professor Lledó-Guillem’s latest monograph The Making of Catalan Linguistic Identity in Medieval and Early Modern Times. From an interdisciplinary perspective, Dr. Lledó-Guillem (Hofstra University) will focus on the political, ideological, and cultural events that made possible the appearance of the Catalan linguistic identity in the thirteenth century as well as the (dis)continuity of this identity up to the middle of the seventeenth century. In particular, the author will analyze how the relationship between Catalan and Occitan played an important role in the support of the monarchy of the Crown of Aragon in the Middle Ages and in the construction of the Spanish Empire in the Early Modern Period. By focusing on texts that had never been analyzed from a linguistic and political point of view, this presentation will question certain canonical ideas such as the natural existence of the Romance Languages and their smooth continuity throughout time.

This event is made possible by the generous support of the Institute for Scholarship in the Liberal Arts, the Medieval Institute, the Nanovic Institute for European Studies and the Center for the Study of Languages and Cultures.