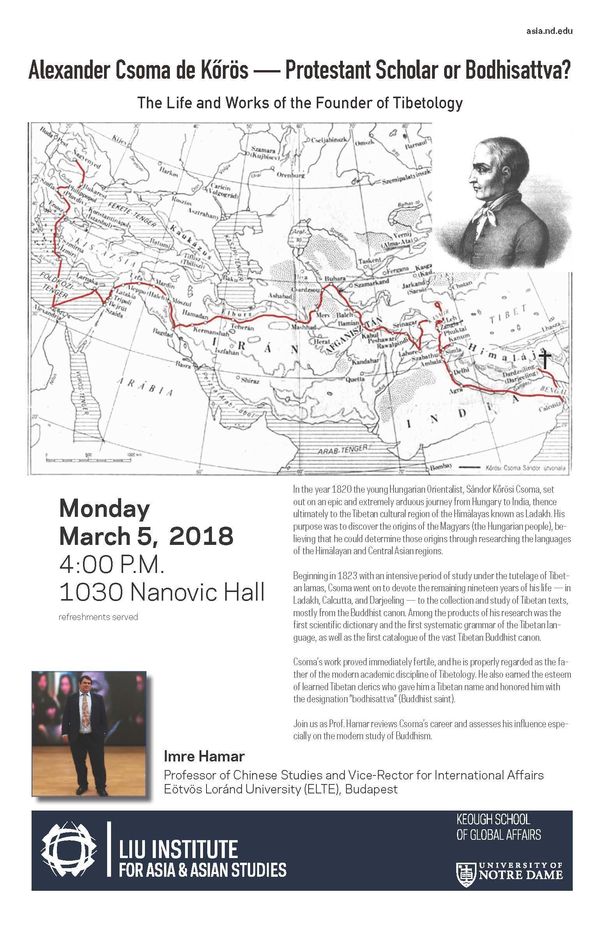 “Alexander Csoma de Kőrös, Protestant Scholar or Buddhist Saint (Bodhisattva): The Life and Works of the Founder of Tibetology”

In the year 1820 the young Hungarian Orientalist, Sándor Kőrösi Csoma (1784/87-1842), trained in philology at the Bethlenianum (the famed Protestant College in Transylvania) and at Göttingen, set out on an epic and extremely arduous journey from Hungary to India, thence ultimately to the Tibetan cultural region of the Himālayas best known now as Ladakh. His purpose was to discover the origins of the Magyars (the Hungarian people), believing that he could determine those origins by study of the languages of the Himālayan and Central Asian regions. Beginning in 1823 with an intensive period of Tibetan language study under the tutelage of Tibetan lamas, Csoma went on to devote the remaining nineteen years of his life — in Ladakh, Calcutta, and Darjeeling — to the collection and study of Tibetan texts, mostly from the Buddhist canon. Among the products of his research was the first scientific dictionary and the first systematic grammar of the Tibetan language as well as the first catalogue of the vast Tibetan Buddhist canon. There had been a few earlier European visitors to Tibet who had learned Tibetan and written about Tibet (e.g., a number of Catholic missionaries — several Capuchins and a Jesuit), but their works languished in obscurity until relatively recently and had no immediate impact on European study of Asia. Csoma’s work, however, proved immediately fertile and he is properly regarded as the father of the modern academic discipline of Tibetology. He also earned the esteem of learned Tibetan clerics who gave him a Tibetan name and honored him with the designation “bodhisattva” (Buddhist saint).

Imre Hamar is a Professor of Chinese Studies at Eötvös Loránd University (ELTE), Budapest. He graduated from Eötvös Loránd University, majoring in Tibetan and Chinese, in 1992, received his Ph.D. in 1997 and his Habilitation in 2004., and became a “Doctor of the Hungarian Academy of Sciences” in 2016. He is presently the Vice Rector for International Affairs at ELTE and Director of both its Institute of East Asian Studies and the Confucius Institute. His research field is Chinese Buddhism, especially the Huayan school. He has held appointments as Fulbright Visiting Professor at University of Virginia and Numata Visiting Professor at Hamburg University. He is the author of A Religious Leader in the Tang: Chengguan’s Biography (The International Institute for Buddhist Studies Tokyo, 2002) and the editor of Reflecting Mirrors: Perspectives on Huayan Buddhism (Harrassowitz, 2007) and Avataṃsaka Buddhism in East Asia: Origins and Adaptations of a Visual Culture (Harrassowitz, 2012).

This lecture is free and open to the public.