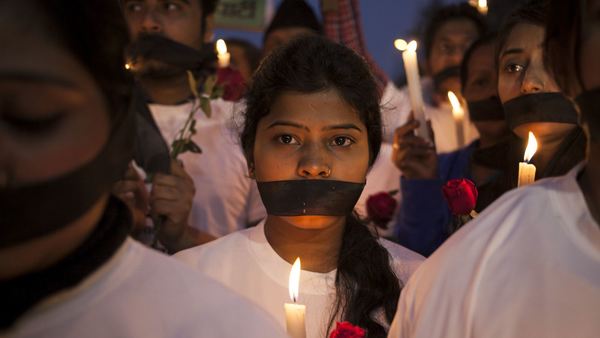 Director Leslee Udwin will introduce the film and participate in a post-screening Q&A session.

More information about the film can be found here.

In 2012, a medical student was the victim of a brutal gang rape on a Delhi bus and later died from her injuries. The tragic event made international headlines and ignited protests by women in India and around the world. Working with an all Indian crew, Leslee Udwin traveled to Delhi to interview with the rapists and defense attorney, none of whom express remorse. An impassioned plea for change, India’s Daughter explores the compelling human stories behind the incident and the political ramifications throughout India.

About the film director Leslee Udwin

In 1986, Leslee faced a life- and home-threatening experience at the hands of one of Britain’s most notorious criminal landlords. After fighting a long and hard battle against him, and winning – setting a legal precedent in the High Court of England – she felt that as many people as possible should know about and be inspired by this optimistic story, so she set about getting it made as a TV film. That was her first step towards producing. The resultant TV film (BBC Screen Two) “SITTING TARGETS” had considerable impact as a piece of campaigning television.

Leslee was then approached by the Birmingham Six Campaign Group to try to set up a film in their defence. For Granada Television (UK) and HBO (US), she developed and produced the award-winning drama-documentary feature “Who Bombed Birmingham?” starring John Hurt. This film was hailed as mould-breaking and had an enormous and controversial impact in the UK. It helped get the case of the six innocent men reopened and led to the long overdue release of ‘the Birminghjam Six’ (after 17 years of wrongful imprisonment). It also led Margaret Thatcher, then PM of England, to pronounce in parliament “We will not have trial by Television in this country!”. The film criticised the police for forcing confessions out of these innocent men, and the British Judiciary for the responsibility they bore for this miscarriage of Justice and abuse of Human Rights.

In 1995 Leslee set up her own Feature Film production company, ASSASSIN FILMS, under the auspices of which she has produced 5 feature films, including EAST IS EAST a comedy drama about cultural integration. This was her first feature film and it went on to win the BAFTA Award for best British Film, and some 35 other prestigious awards worldwide. EAST IS EAST was the first British independent low-budget film to cross over into mainstream cinemas and become a worldwide hit. It has contributed strongly to inter-cultural relations between the British and Asian communities in the UK, and is used as a learning tool in schools across Europe.

Leslee was awarded the London Critics’ Circle Producer of the Year Award.

Amongst further feature films, Leslee also Produced WEST IS WEST (starring Om Puri, Ila Arun, Vijay Raaz), a sequel to EAST IS EAST, which was a smash hit in the UK and which won a number of international awards.

As well as producing Leslee also lectures on film and its value as a tool for change – including seminars at (amongst others) The Danish National Film School, the National Film and Television School of the UK, the Oxford Union at Oxford university, London Film Academy, and the University of Notre Dame, USA.  This visit marks the third time she has visited the University of Notre Dame with the Nanovic Institute Film Series.