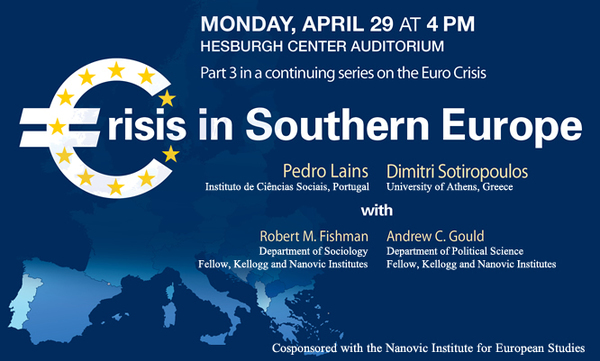 The Southern European countries that initiated the ultimately worldwide third wave of democratization in the 1970s are again in the news—but this time for tragic reasons. They are the epicenter of the current Euro Crisis—the location where this major challenge to the world economy first emerged and where its human and political costs are most strongly felt.

In this panel, part of an ongoing series on the Euro Crisis, leading scholars from two of the most strongly affected countries—Greece and Portugal—will present their analyses of the crisis in their own countries and of the broader regional and global implications. Additional commentary will be provided by Kellogg Institute experts.

Cosponsored with the Nanovic Institute for European Studies