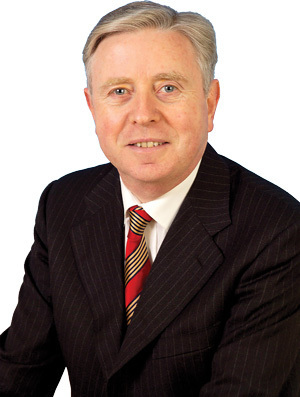 Former President of the European Parliament, Pat Cox, will present a lecture on the European Union on February 26 at 4:30 p.m. in the Eck Visitors’ Center Auditorium.

Pat Cox was born on 28 November 1952 in Dublin to David and Ellen Cox (née Redmond), both now deceased. The eldest of two boys, he moved to Limerick at the age of eight after his Father, a watchmaker with West Jewellers, was made redundant. He was educated at Our Lady of the Assumption, Walkinstown, Drimnagh Castle CBS and in Limerick at St. Munchin’s CBS and Ardscoil Rís. He graduated from Trinity College, Dublin in 1974 with a degree in Economics.

He began his adult working life as a lecturer in Economics with the Institute of Public Administration and taught for six years in the National Institute of Higher Education, now the University of Limerick. He speaks Irish and French.

He married Cathy Tighe in 1974. The couple have seven children (six now adult, two sons and four daughters, and Mary who died in a road traffic accident at the age of six); they also have seven grandchildren.

In 1979, Pat Cox stood in Limerick as a Fianna Fáil candidate in the local elections without success. In 1982, he joined the staff of RTÉ as a current affairs broadcaster and worked there for four years until being appointed to the post of General Secretary of the Progressive Democrats. In June 1989, he was elected as MEP for Munster. During his first term in the European Parliament, he was also elected TD for Cork South Central, after which he was appointed Finance Spokesperson for the Progressive Democrats.

Currently, he is a member of the Supervisory Board of Michelin and the European Advisory Council of Microsoft. He is also the EU Coordinator for the €52 billion Trans-European Transport Network (TEN-T Priority Project No I), a high capacity rail link from Berlin to Palermo. In addition, he serves on a number of voluntary organisations and educational bodies. These include:

Other voluntary positions which Pat Cox holds include:

Honorary doctorates from Trinity College Dublin, the Open University, the American College Dublin, NUI Maynooth and the University of Limerick
Freeman of Limerick City
US Chamber of Commerce in Europe 2004 Transatlantic Business Award of the Year
Charlemagne Prize 2004
Commander of the National Order of the Légion d’honneur (France)
Knight Grand Cross of the Order of Merit of the Italian Republic

Pax Americana, the Marshall Fund and Franco–German reconciliation through post war European integration opened up a period of unparalleled peace with prosperity on continental Europe. Economically and politically the project moved through a series of European Treaties from the original European Coal and Steel Community (1951), through the European Economic Community (1958), to the Single European Act (1988) and the Treaty on European Union, incorporating the eventual launch of Economic and Monetary Union and the single currency (1992). Further institutional refinements and policy changes were made in follow up Treaties, named after the capitals in which they were signed, prior to their ratification. The Treaties of Amsterdam (1996), Nice (2002), Lisbon (2009).

The EU has both deepened and enlarged at the same time, growing from an original Community of six, to nine, to ten, to twelve, to fifteen, to twenty five, to twenty seven and on July 1st 2013 to twenty eight member states when Croatia officially joins. Incorporating more than 500 million citizens, it constitutes along with the USA currently one of the largest, richest markets in the world.

While the Treaties have developed degrees of political and policy integration in issues such as Justice and Home Affairs and Common Foreign and Security Policy, including now for the first time a European External Action Service, the EU itself is neither a classic federation nor merely a classic intergovernmental organisation. It may be expected to do less than a full federation and much more than a typical intergovernmental organisation. Thus it is, organisationally and politically, permanently in a state of ‘in-betweenness’.

It is that state of ‘in-betweenness’ that has challenged the EU’s ability to mobilise resources and build capacity in a timely way to address the unprecedented scale and depth of the challenges arising from the current Euro zone crisis, itself triggered in part by the centennial scale Western economic crisis of the past several years.

Constrained under Treaty rules by a ‘no bail out’ clause for Eurozone member states with excessive public deficits and a ‘no monetary financing’ rule for the European Central Bank, the ‘federal’ centre of the EU struggled to cope with the first wave of challenges of the so-called Greek debt crisis. When it emerged in early 2010 the tool box was empty.

As a result, the construction of the policy response fell back on member state governments (27 for the EU of which 17 are members of the Eurozone) meeting in Council at leader and finance minister levels, with all their parliamentary, public opinion, constitutional and electoral cycle diversities and constraints in play.

The system with immense difficulty has moved from a quick fix, one-off ‘solution’ for Greece in March 2010, to the establishment of a set of temporary funds to assist states in trouble later in 2010, Ireland, and 2011, Portugal, to fashioning a permanent funding mechanism (the European Stability Mechanism) with associated strict fiscal conditionality (the European Fiscal Compact) through two intergovernmental, not EU, Treaties, that are now law.

The European Commission and European Parliament together with the Council of Ministers has introduced an unprecedented volume of new banking and financial legislation, together with a wide array of new policy tools to ensure that Eurozone member states conform in future to the rules of the game, especially the need henceforth to regard their national fiscal, budgetary and structural reform policies genuinely as a matter of ‘common interest’.

As the crisis deepened, with the ‘contagion’ spreading from peripheral and smaller states to the core and in particular Spain and Italy, the European Central Bank (ECB) also has made unprecedented interventions in the Eurozone money markets, including emergency and medium term liquidity assistance for banks and through a promised bond purchasing scheme has declared the intention ‘to do what it takes’ to save the Euro.

A decision has been taken recently at the highest political level to proceed in the coming months with the establishment of a Banking Union requiring legislation for an ECB-led European banking supervisor for Eurozone banks, a bank resolution mechanism for the orderly winding up of failed banks and a ‘federal type’ deposit insurance guarantee scheme.

Further proposals are on the table for a ‘genuine economic and monetary union’ to include an economic union, a fiscal union and a political union. The pace and form of these initiatives remains to be seen but separately and collectively, together with the banking union, they represent a major step in the direction of further policy integration. They are in effect a recognition notwithstanding the crises in Greece, Ireland, Portugal and elsewhere that a significant part of the problem stems from a systemic design flaw from the outset in the make-up of the economic and monetary union project.

These initiatives represent perhaps for the first time since the outset of the current crisis the prospect of the EU getting ahead of the curve in policy terms as distinct from labouring under a constant sense of crisis management which has characterised so much of the response over the past three years.

All this is against a political backdrop that is constantly changing. Italian general elections are imminent. David Cameron, the UK Prime Minister, has announced his intention to hold an ‘in-out’ referendum in 2018 based on negotiations of a so far unspecified character with the EU and its member states. Germany, an indispensable player due to its comparative wealth and stability within the Eurozone if reluctant leader, holds its legislative elections in September.

There are tensions between larger and smaller states, Northern and Southern states, creditor and debtor states, Euro federalists and Euro sceptics all informing public opinion, media commentary and analysis. Finding unity in this diversity remains a challenge and is feeding into the day to day political debate and reality. Reconciling the differences is not easy, nor is it impossible. The stakes are high. The costs of resolution are high. The costs of failure would be higher still.

In summary, as regards the Eurozone, the lecture will reflect on where have we been, where are we now and, on the balance of probabilities, where are we going?