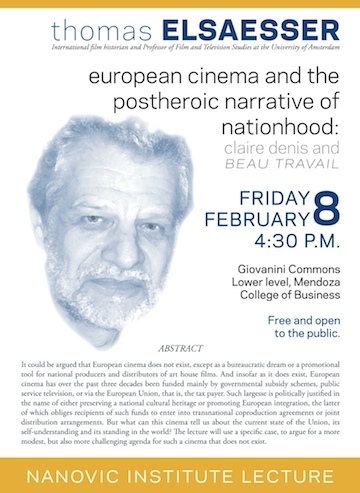 Abstract: It could be argued that European cinema does not exist, except as a bureaucratic dream or a promotional tool for national producers and distributors of art house films. And insofar as it does exist, European cinema has over the past three decades been funded mainly by governmental subsidy schemes, public service television, or via the European Union, that is, the tax payer. Such largesse is politically justified in the name of either preserving a national cultural heritage or promoting European integration, the latter of which obliges recipients of such funds to enter into transnational coproduction agreements or joint distribution arrangements. But what can this cinema tell us about the current state of the Union, its self-understanding and its standing in the world? The lecture will use a specific case, to argue for a more modest, but also more challenging agenda for such a cinema that does not exist.

Thomas Elsaesser is an international film historian and a Professor of Film and Television Studies at the University of Amsterdam. Since 2005, he has directed an international research project on “Cinema Europe” and remains a major voice in European Film Studies.