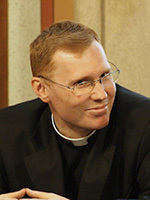 Reverend Anzelm Szuromi, Rector at Pázmány Péter Catholic University in Budapest, Hungary, and President of the Institute of Canon Law will give a lecture on “Medieval Manuscripts Lost After the Napoleonic Wars: A Tale of Rediscovery.”

Abstract: The Medieval Latin collection of the National Library of St. Petersburg has some remarkable manuscripts from the 7th-14th centuries. Since 1795, volumes that were transferred by the Russian Army during the Napoleonic War, for instance, from Warsaw, arrived in St. Petersburg. According to the decision of Catherine II, with the approval of the Cabinet, the library of St. Petersburg was enriched by numerous collections of volumes in 1796 and 1797. the continuously arriving books forced Alexander I to establish a new library, which was erected on October 14th, 1810 and named Imperial Public Library of St. Petersburg. This collection contains numerous manuscripts from the Norbertine Abbey of Weissenau and also from the famous Abbey of St. Germain des Prés (Paris). During the French Revolution, the monks left the Abbey of St. Germain des Prés and the greater part of the library was removed to Amines in 1791. Many books of the remaining material had been procured and arrived to St. Petersburg. At the time of the Napoleonic War the material of the Abbey’s Library of Weissenau was scattered to Berlin, Prague, St. Petersburg and other places. These manuscripts and their rediscovery represent a unique value in the medieval cultural heritage of Europe.