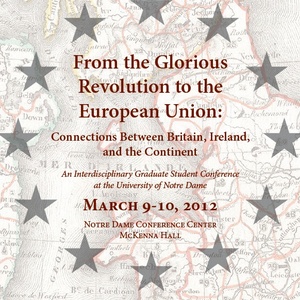 An Interdisciplinary Graduate Student Conference at the University of Notre Dame
March 9 & 10, 2012

Sponsored by the Nanovic Institute for European Studies with additional support provided by the Graduate School, the Keough-Naughton Institute for Irish Studies, and the Department of English at the University of Notre Dame.

The aim of this conference is to focus on the relationships between the four nations of the British Isles and the rest of Europe in order to examine the nature of those connections and to track the changes and continuities over time. Although the historical roots of this interdependency can be traced back even further, this conference will begin with the Glorious Revolution of 1688 (which brought William of Orange and his European interests to the British monarchical and political stage in a dramatic fashion) and will end with the uncertainties of the present day. This conference will allow for the discussion of the complex relationships between the Continent and the Britain and Ireland in the fields of history, literature, folklore and material culture. Critical areas of connection are evident in the intellectual exchanges of the Enlightenment, European Christendom, the mechanization and modernization of industry, the rise of urban metropolises, pan-European economic exchange, the spread of political theories from democracy to communism to fascism, the competing imperial ambitions of nations, and the continued involvement in myriad wars throughout the last three centuries. All of these connections provide ample opportunities to explore the history of European interdependence.

The humanities are increasingly viewed as a set of global phenomena, with emphasis on an ever-expanding “globe” incorporating postcolonial and Atlantic studies. As persuasive as this broader narrative is, we hope with this conference to advance an understanding of one vital but under-investigated constituent part of that global phenomenon: how various European nations’ interdependence has developed over time and how Europe provides examples of national and global cultures behaving as interdependent yet individual. This central concern has many implications we seek to tease out, including questions of how national identity is reconciled with European identity, the potential associations between revolutions (the Glorious, French, Industrial, etc.) across time and space, the effects of European conflicts on the connections between the nations, and the role of empire-building and the impact of resulting rivalries between nations on their relationships. We will even need to question how we define sovereignty itself.

By looking to the Continent from the British Isles as opposed to the Atlantic World, we hope not only to emphasize the historical relationship that has existed throughout (at least) the last three hundred years, but also to understand how this relationship effects both the British Isles and Europe today. The current economic collapse in Ireland and the severe austerity measures in Britain reveal the deep-rooted interdependence of the British Isles in a European context, and our conference will take full advantage of this moment of increased attention and interrogation.