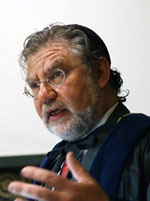 This lecture is open to students, faculty, staff, and members of the public.

Professor Weiler’s lecture “Freedom From Religion” on Wednesday, November 30 at 4:30 pm will focus on the March 2011 decision of the European Court of Human Rights in Lautsi v. Italy, which held that the Italian law providing for the display of the crucifix in public schools does not violate the European Convention on Human Rights. That ruling overturned a previous, unanimous decision by a smaller group of judges of the same court, that had found that crucifixes could not be displayed in Italian schools. The Grand Chamber decision represents a major victory for religious rights and religious pluralism in Europe.

J. H. H. Weiler is University Professor and European Union Jean Monnet Chair at NYU Law School. He serves as Director of The Tikvah Center for Law and Jewish Civilization and The Straus Institute for the Advanced Study of Law and Justice. He was previously Professor of Law at Michigan Law School and then Manley Hudson Professor of Law and Jean Monnet Chair at Harvard Law School. He is a Fellow of the American Academy of Arts and Sciences and recipient of a doctorate Honoris causa from several universities. His publications include Un’Europa Cristiana (translated into nine languages), The Constitution of Europe – “Do the New Clothes Have an Emperor?” (translated into seven languages), and a novella, Der Fall Steinmann.