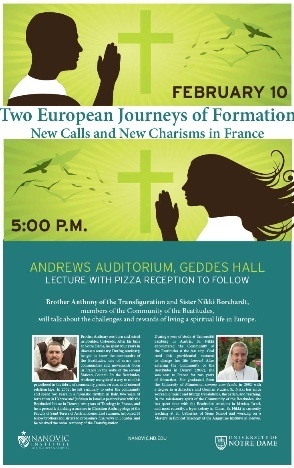 Brother Anthony was born and raised in Boulder, Colorado. After his time at Notre Dame, he spent four years in diocesan seminary. During seminary, he got to know the community of the Beatitudes, one of many new communities and movements born in France in the wake of the second Vatican Council. In the Beatitudes, Anthony recognized a way to root his priesthood in the fabric of community praise, service, and fraternal relationships. In 2002, he left seminary to enter the community and spent two years in a monastic rhythm in Italy, two years of formation in Hebrew and Judaism in Israel, a pastoral year with the Beatitudes’ house in Denver, two years of Theology in France, and he is presently finishing a masters in Christian Anthropology at the Faculty of Saint Teresa of Avila in Rome. Last summer, he joined 16 fellow brothers and sisters to pronounce final vows in Lourdes, and he received the name Anthony of the Transfiguration.