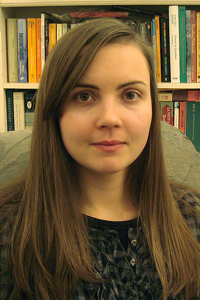 Ruth Cribb, an Exhibitions Co-ordinator at the Victoria & Albert Museum and currently working on a PhD on the sculpture of Eric Gill at the University of Brighton, will be giving a presentation on her Eric Gill research and a make a few remarks on the All Art Is Propaganda exhibition on Wednesday, March 3rd at 4pm in the Special Collections Reading Room located in 102 Hesburgh Library. Ruth is also the great granddaughter of Joseph Cribb who was member of the Guild of Saint Joseph and Saint Dominic.

All Art Is Propaganda is an exhibition organized by University of Notre Dame undergraduate students Micahlyn Allen, Kelly Fallon, and Juliana Hoffelder under the direction of John Sherman of the Department of Art, Art History, & Design. The exhibition is located in the University of Notre Dame Library Special Collections from February 22 to August 20, 2010. All materials on display in All Art Is Propaganda are drawn from the Department of Rare Books and Special Collections’ Eric Gill Collection.

During the fall 2009 semester, John Sherman offered a special class designed to bring together an interdisciplinary group of students to reflect on the lasting legacy Eric Gill and the Guild of Saint Joseph and Saint Dominic made on art, design, and Catholic Social Teaching. In addition to the exhibition, each student has written an essay that will be published within an exhibition catalog.

Support for this project at the University of Notre Dame was generously given by the Institute for Scholarship in the Liberal Arts; Learning Beyond the Classroom; Department of Art, Art History, & Design; the Nanovic Institute for European Studies; and the Office of Undergraduate Research. In England, the staff of the Victoria and Albert Museum, the British Museum, and the Ditchling Museum was very generous with their time.

Eric Gill (1882-1940) was an English engraver, sculptor, typographer, and writer. Gill was a social reformer as well as a designer, and his activities straddled a variety of disciplines and intellectual movements. Gill began his career in London, but in 1907, he moved to the small village of Ditchling, Sussex. With the presence of Gill, Edward Johnston, Hilary Pepler, and others, Ditchling emerged as the home for a community of artists and designers who banded together to create the Guild of Saint Joseph and Saint Dominic.

Eric Gill may be the most famous member of the Guild of Saint Joseph and Saint Dominic, but he did not work alone and the guild’s other members provide equally compelling examples of careers marked by the integration of faith, work, and social commitment. Along with Gill, Pepler, Johnston, David Jones, and Philip Hagreen, formed the Guild of Saint Joseph and Saint Dominic into an idea and produced a body of work that continues to fascinate those interested in the Catholic Social Teaching as defined in the Distributists Movement in England in the first half of the 1900s. The collection held by Notre Dame’s Department of Rare Books and Special Collections contains a significant amount of their work.