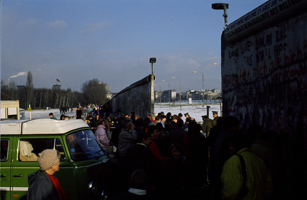 Ambassador J.D. Bindenagel will lead a panel discussion about the East German revolution at 4:00 p.m. Four of our colleagues from the History Department (Tom Kselman, Mikolaj Kunicki, Semion Lyandres, and Alex Martin) will be respondents.

J.D. Bindenagel, Vice President for Community, Government, and International Affairs, manages and develops governmental and international relationships that support DePaul University’s mission to prepare students to influence and shape the world in which they live. He is responsible for deepening DePaul’s local, global and government relationships in Chicago, Illinois, Washington and the world through higher education policy advocacy and public support for academic programs.

Bindenagel served in the U.S. Army, the State Department and in the U.S. Embassies in East, West and united Germany in various capacities from 1972 to 2003. He was U.S. Chargé d’Affaires and deputy chief of mission in the U.S. Embassy, Bonn, Germany, from 1994 to 1997 and director for Central European Affairs in the Bureau of European and Canadian Affairs at the State Department from 1992 to 1994. He was U.S. deputy chief of mission at the U.S. Embassy in Berlin, East Germany, at the time of the fall of the Berlin Wall in 1989, and helped negotiate the reunification of Germany.

Due to his extensive experience as a former American ambassador and 28-year veteran of the U.S. diplomatic corps, Bindenagel was appointed by President Bill Clinton in 1999 as U.S. Ambassador and Special Envoy for Holocaust issues and negotiated agreements on compensation for World War II-era forced labor, insurance, art, and property restitution as well as Holocaust education, research and remembrance.