“The Fall of the Wall and Its Implications Twenty Years Later”

Horst Teltschik was Helmut Kohl’s national security advisor and the principal architect of the negotiations that led to the unification of Germany. He will share an insider’s perspective on the Wall’s demise and the implications of these developments for German-American relations today.

Sponsored by the Nanovic Institute for European Studies, the Henkels Lecture Series, and the Institute for Scholarship in the Liberal Arts at the College of Arts and Letters, University of Notre Dame. 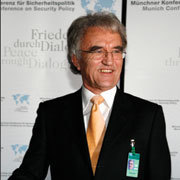 Teltschik became chief executive of the Bertelsmann foundation in 1991, one of Germany’s most influential political think tanks. From 1993 to June 2000, he was in charge of public affairs and served on the management board of BMW. Teltschik continued to serve the BMW board as a representative to Central and Eastern Europe, Asia, and the Middle East until 2003 when he became president of Boeing Germany.

In addition, Teltschik lectured at the economics faculty of the Technical University of Munich from 1996 to 2007, where he was appointed honorary professor in 2003. From 1999 to 2008, he chaired the Munich Security Conference.

Today, Teltschik advises an international clientele on business and political issues. He sits on the supervisory and advisory boards of German, Swiss, and American companies as well as non-profit organizations. Teltschik has been president of the German-Israeli business association (Deutsch-Israelische Wirtschaftsvereinigung, DIW) in Munich and vice president of the Israeli-German chamber of commerce in Tel Aviv.