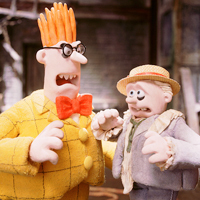 Screenings: 6:30 and 9:30 pm
Director/Animator Merlin Crossingham is scheduled to introduce the 6:30 pm screening.

Check out the new Wallace and Gromit advertisement that is sweeping the UK as well as a behind the scenes look at the commercial with Merlin Crossingham!

A MATTER OF LOAF AND DEATH (2008)
The newest Wallace and Gromit film
Director: Nick Park 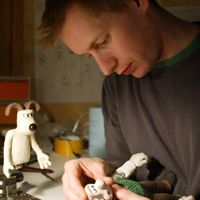 For the feature film ‘Wallace and Gromit Curse of the ware Rabbit’ Merlin was second unit director he also directs for Aardman’s TV commercial department.

As an animator Merlin supervised the animation for Wallace and Gromit ‘A matter of loaf and death’. He was a key animator on the feature films ‘Wallace and Gromit Curse of the ware rabbit’ and ‘Chicken Run’. He has also animated ‘Morph’, and many TV commercials. In addition, Merlin filmed the world’s first stop-motion 3D IMAX test. Apart from Aardman, Merlin also had the opportunity to work with the legendary Ray Harryhausen.

Merlin joined Aardman from the company’s animation training course run in conjunction with the University of the West of England, after completing a degree in Film and Photography at Newport Film School in 1994.

Earlier on, Merlin attended the Bristol Steiner School and the Centre for Circus Skills and Performing Arts in Bristol. He specialized in acrobatics, uni-cycling and trapeze and trained with the Moscow State Circus during one of their stays in Bristol. These activities led Merlin into climbing. He worked as an instructor and climbed professionally, before choosing animation as a career.