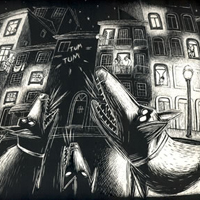 Abi Feijó was born in Braga, Portugal in 1956 and graduates from the Oporto School of Fine Arts. In 1984 he came to the National Film Board of Canada for an animation internship, which resulted in the short film Oh que Calma. Soon after, he founded Filmógrafo, an animation studio based on the NFB model of handcrafted auteur animation. The studio has built an international reputation that extends far beyond Portugal.

As a Director, Feijó explores a variety of animation techniques, always with a carefully written story. In 1993, he made Os Salteadores/The Outlaws, an animated short using drawings on paper; this political drama recalling a painful incident from recent Portuguese history won numerous international awards. It was followed by Fado Lusitano (1995), a sort of self-portrait of Portugal, his history, art and culture, using paper cut-out animation. In 2000, in co-production with RTP and the French Program’s Animation / Youth Studio, he completed Clandestino/Stowaway, a sand animation film whose richly textured images evoke the difficult struggle for freedom.

At Filmógrafo, Feijó serves as producer and artistic advisor. He also gives workshops and training around the world. He is currently involved in establishing The Animation House, a cultural centre devoted to the art of animation in Oporto.