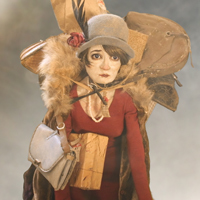 This program of Academy Award Nominated Animated Short Films is your chance to see the Oscar nominated short films of the 80th Academy Awards, including the winner, Peter and the Wolf, while supporting the Nanovic Institute’s film series on European animators.

Peter and the Wolf, (U.K.) is a stop motion animated film directed by Suzie Templeton, and is set in contemporary rural Russia. It is much darker that several previous adaptations of Sergei Prokofiev’s suite for children.

The program will be introduced by Professor Donald Crafton and includes:

In 1969, fourteen-year-old Jerry Levitan snuck into John Lennon’s hotel room with his tape recorder and persuaded him to do an interview.

A timid woman boards a mysterious night train and has a series of frightening experiences.

A priest tries to sell an old man a machine that he promises will transport him to heaven.

In nineteenth-century Russia, a teenage boy in search of love is drawn to two very different women. PETER & THE WOLF Directed by Suzie Templeton and Hugh Welchman 27 minutes, Silent, Drama A young boy and his animal friends face a hungry wolf in Prokofiev’s classic musical piece.