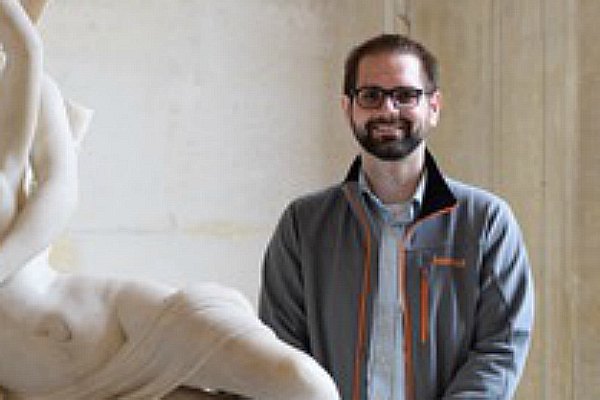 Marin Mersenne (1588-1648), a French Franciscan friar, was at the center of a seventeenth-century correspondence network in Europe that included all of the major intellectuals of that time. Thomas J. Meyers, a graduate student in History, received a Graduate Summer Travel and Research Grant from the Nanovic Institute to begin work on cataloguing those letters and exploring Mersenne’s position in early modern European intellectual culture. Thomas recently wrote to us about his research:

My project considers a pivotal seventeenth-century intellectual, Marin Mersenne. Although he was one of the most influential figures in the early history of science—contributing to discussions of optics, harmonics, and natural philosophy, among others—historical investigations of him largely have been reduced to passing mentions. There are, however, two frequently cited monographs on Mersenne. Robert Lenoble considered Mersenne and the rise of mechanistic philosophy. Peter Dear has also written on Mersenne. Dear complicates discussions of the Scientific Revolution by charting Mersenne’s contributions as a Catholic priest, in what is often considered a secular coterie. However, this past historiography does not do justice to the magnitude of Mersenne’s position in the early modern intellectual world. By exploring his correspondence, I hope to come to a better understanding of the ideas of Mersenne and other major intellectuals—both religious and secular—in the early modern period. I also hope to contribute to discussion about information exchange and the spread of new ideas and philosophies that preceded the Enlightenment.

At the Bibliothèque Nationale de France and the Bibliothèque de l’Arsenal, I spent time reading through the original correspondence of Marin Mersenne. These libraries hold the majority of the extant letters written to Mersenne by various secular and religious intellectuals. While this trip to the archive has provided me with insight into Mersenne’s intellectual life, it has also raised new questions. By examining the original documents I was able to view annotations and corrections made in the text and in the margins of the letters. In some cases, the envelope in which the letter was sent was preserved. This provided an interesting window into Mersenne’s world. He seems frequently to have used the envelopes as scratch paper to evaluate some of the mathematical, geometrical, physical, and musical ideas contained in the correspondence. These doodles are not reproduced in print editions.

Handling the envelopes, something so often discarded as mundane, provided a different perspective on how the letters might have been read. It also prompted more questions than it answered. I found myself wondering about the daily procedures surrounding Mersenne’s letter-writing. I wondered about who was involved in this exchange of ideas and information. It was also interesting to see the relative speed with which the letters circulated. I hope that these new questions can be answered in my dissertation through further research, both at home and abroad.

My research attempts to remedy the historiographical oversight that has not considered Mersenne’s correspondence and the flow of information in seventeenth-century Europe. In so doing, it complicates several historiographies. First, it provides a snapshot of the religious and intellectual life in France after the Council of Trent (1545-1563). At the same time, it considers Mersenne and the members of his web as early Enlightenment figures. Yet, they were not secular figures. Rather, they struggled to make sense of their faith—frequently Catholicism, but also various Protestant confessions—in the light of ever-increasing human understanding. My project is certainly ambitious. However, it has the potential to force reconsideration of the early seventeenth century as a pivotal period of early modernity that contributed to the rise of secular society.

In addition to the advances I made with my dissertation research, being in France provided a unique opportunity for cultural immersion. While abroad I lived about five miles from the Bibliothèque Nationale de France—Site Richelieu. Rather than ride the metro to and from work, I took the opportunity to walk. While it may seem absurd to commute ten miles by foot each day, this provided me the opportunity to tour the city. Doing so led me to unique locations and engrossed me in frequent conversation. These conversations allowed me to improve my spoken French while exploring Parisian life and culture. I also had the opportunity to tour some of the Parisian sites on days the BNF was closed. This further allowed me to consider my research and the French intellectual and artistic heritage.