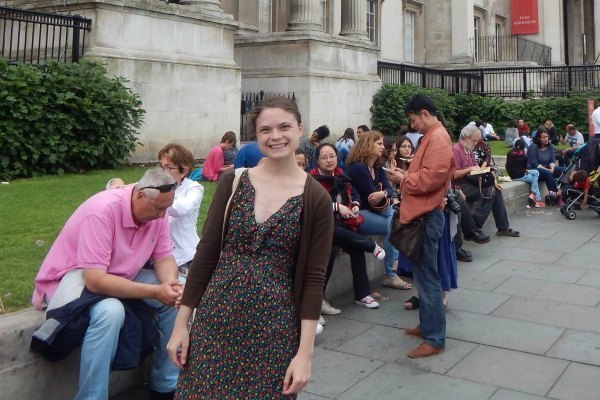 How did readers experience texts after the coming of the printing press to England in 1476? Mimi Ensley, a doctoral candidate in the department of English received a Graduate Summer Travel and Research Grant to track down the 16th-century readers of medieval romance in the margins of early printed books. Mimi recently wrote to us about her research:

It has long been recognized that the physical form in which a literary text is preserved affects the ways in which readers experience it. After William Caxton set up his printing press in Westminster, audiences suddenly had a new format in which to experience the medieval authors of the past. How did this shift from manuscript to print affect readers’ encounters with literary texts formerly available only in hand-written books? Are there significant continuities between the two formats, and what were the important changes? In what ways did the new print medium affect how post-print readers understood and even constructed the medieval literary past?

While previous scholars have approached these questions by tracing the reception of canonical medieval authors, such as Geoffrey Chaucer, my project focuses on an understudied, but extremely popular genre: the romance. Whereas Chaucer’s works, in the 16th century, were printed in large, imposing, folio volumes, romances were produced in less-expensive, small-format books, which were often literally read to pieces, leaving little material for modern scholars to interpret. My research seeks to understand the readers of these ephemeral books by studying the traces they left behind.

One way to access the experiences of past readers is by recording and interpreting the notes, doodles, and other marks they left in the margins and other blank spaces of their books. For my project, I visited libraries in London, Oxford, and Cambridge to search for these readers’ marks in printed copies of early-modern romance. Though a few copies displayed no readers’ marginalia, others pointed toward the wide range of possible ways later readers used and understood medieval romance.

A few findings stand out as particularly revelatory. First, it is clear that these books were often shared amongst networks of readers, rather than owned by a single person. For instance, a reader keeps record of his borrowing of the romance Robert the Devil (ca. 1500) by writing, “This is Anderie Holmans booke till Edwarde Powell come a gaine” in a blank space in the book. Second, romances clearly attracted a wide variety of readers: both women and men, children and adults. My work shows that children often used the margins of romance books to doodle and practice alphabets or handwriting. Finally, it is clear that readers of printed romances engaged with all aspects of the book, not only the text on the page. Blank pages were particularly fruitful, allowing readers to inscribe new bits of text or image. Moreover, readers often added pen drawings to the woodcut images already in their books, embellishing and personalizing the page.

Overall, my work challenges assumptions about the nature of the divide between the medieval and later periods. The 16th-century readers I discovered were actively engaged in medieval literary works, not studying them like scholars, but reading them as living texts, relevant to their own experiences. Additionally, these reading practices provide evidence for a degree of continuity across media — manuscript readers and print readers of romance often had similar responses to their books. Ultimately, this work may help scholars re-consider the ways we conceive of historical periods or classify phenomena as “medieval” or “modern.”

I am truly grateful for the opportunity the Nanovic Institute provided me to spend time in the archives of the United Kingdom this summer. After each day in the libraries, I emerged re-invigorated about my dissertation project and its importance for our understanding of the readers of the past, readers both surprisingly similar to and distanced from ourselves. It is inspiring to share a reading experience with and handle the same material as readers from centuries past, and I look forward to finding out more about those readers as my dissertation progresses.