What if instead of responding to genocide, it could be prevented?  What information would be used to create an early warning system?  Kristina Hook, a Ph.D. student in Anthropology and Peace Studies, presented her research on genocides and mass atrocities at the largest annual gathering of European social scientists, hosted by Prague’s historic Charles University.  She represented the University of Notre Dame with the support of a Graduate Professional Development Grant from the Nanovic Institute for European Studies. 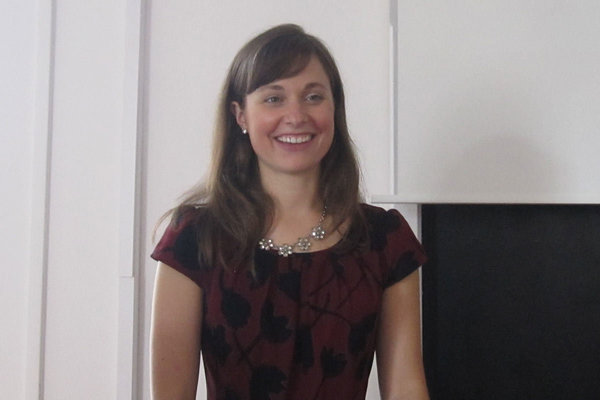 While genocides and other types of large-scale massacres shock the world, many social scientists still debate what factors are most likely to cause them.  Debates over genocide causality have raged since the term genocide was coined in the 1940s and show few signs of abating due to the diversity of genocide experiences from industrialized, economically integrated Nazi Germany to rural, landlocked Rwanda.  Further complicating this challenge of detecting genocides in advance, broader international relations complexities impact national and multilateral decisions to intervene in at-risk locations, prompting some human rights watchers to critique international responses as “too little, too late.”

This September, I presented research that analyzes the intersection of these political and analytic challenges at the largest annual gathering of social scientists in Europe, the European Consortium for Political Research (ECPR) General Conference.  This academic conference hosted more than 2,000 academics at the historic Charles University in Prague, the oldest university in Central Europe and one of the oldest in Europe.

At the ECPR conference in Prague, I shared my paper entitled, “The Politics of Never Again:  Analytically Quantifying and Politically Qualifying Genocide in International Politics.”  My paper focused on the factors that enhance or decrease the likelihood of national and multilateral interventions in locations that are experiencing genocides.  I traced these developments from the 1948 United Nations adoption of genocide as a crime under international law through the Cold War era to the modern post-Cold War period.  I found these issues to be incredibly complex and interwoven, as many challenges complicate robust international responses to genocide.  For instance, such hindrances include domestic political limitations or a lack of consensus on international norms like state sovereignty or national interest.

Despite these challenges, I argue that the modern stress on preventing—as opposed to simply responding—to genocide allows for social scientists to make a significant contribution in the area of mass violence early warning.  I argued that preventing genocides requires international action before genocidal criteria has been firmly established, thereby marking a shift in the types of information that social scientists should provide to policymakers.  Significantly, preventive efforts require targeting a range of gross violations of human rights that may or may not spiral into classically defined genocides.

Through this research, I seek to reorient analysis of emerging genocide threats within larger conversations about other types of violence that also disproportionally impacts civilians, such as mass atrocities.  Genocide is often discussed through isolated case studies or in comparison with other genocides, but my work seeks to understand the dynamics that both link and distinguish genocides from other types of violence.  My conference paper ultimately argued that current international interest in preventive efforts provide a ripe opportunity for social scientists to provide analytic early warning frameworks that organize patterns of violence in chaotic and rapidly changing environments.

The paper that I presented is a part of my larger doctoral dissertation on genocides and mass atrocities, which I am completing as a dual student at the Kroc Institute for International Peace Studies and the Department of Anthropology.  Since coming to Notre Dame in the fall of 2015, I have conducted research and participated in field schools in Ukraine, Germany, and Bosnia-and-Herzegovina.  By participating in the ECPR conference, I was able to share my emerging findings with scholars across Europe through a well-attended panel discussion with other social scientists and international law experts.  I particularly appreciated the opportunity to answer questions from scholars studying related issues from diverse disciplinary backgrounds.  In addition to building my network of scholarly contacts, I will incorporate the feedback I received at this conference as I prepare my conference presentation for publication.  Thanks to the support of the Nanovic Institute, I am proud to have represented the University of Notre Dame at this prestigious forum and look forward to utilizing the contacts and the constructive feedback that I received at the ECPR conference as I continue my PhD process here at Notre Dame.