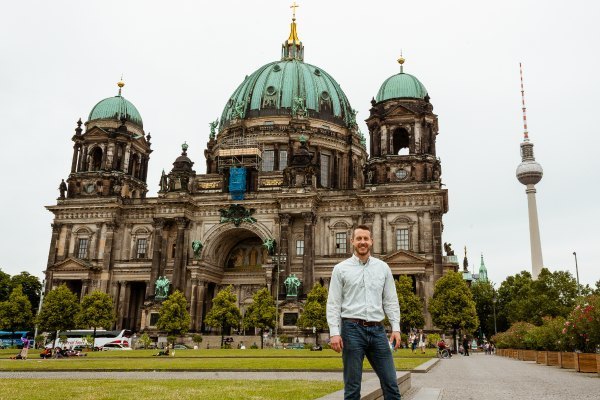 James Strasburg, a doctoral candidate in the History department, received a Graduate Summer Travel and Research Grant from the Nanovic Institute to explore the intersection of religion and international politics in the postwar reconstruction of Germany. He recently wrote to us about his research:

My research project investigated the role of religious actors and ideas in the postwar reconstruction of Germany. In particular, I examined the work of a group of German and American Protestants — including figures such as Martin Niemöller, Eugen Gerstenmaier, Reinhold Niebuhr, and Stewart Herman — who partnered together to recreate Germany as a democratic and civically engaged nation in the aftermath of World War II. I set out to examine how these religious figures utilized the Judeo-Christian tradition to shape Germany’s postwar political and economic order.

Although historians of postwar Germany have written lengthy accounts of the postwar reconstruction process, religion continues to be a neglected topic in the field. Historians have examined the politics of re-education and denazification, the Nuremberg Trials, and the economic impact of the Marshall Plan. Religion often plays a minor role in these narratives, overshadowed by political and economic developments. Yet Germany’s churches proved to be the single national institution to survive the Third Reich. Furthermore, American foreign policy makers tapped into the Judeo-Christian tradition in order to provide a moral and religious framework to their reconstruction policies. My research addresses this oversight through demonstrating the centrality of religion in the formation of the postwar political and economic order.

Over the course of the summer, I consulted the collections of multiple archives in Germany, the most significant ones being the Evangelisches Zentralarchiv, the Evangelisches Landeskirchliches Archiv in Berlin, the Diözesanarchiv Berlin, and the Archiv für Diakonie und Entwicklung. Through my consultations, I examined key religious events like the 1945 Treysa Conference, the formation of the German Protestant relief agency Hilfswerk, the reconstruction and reformation of German Protestantism, and the interactions of German Protestants and Catholics with American military authorities and Protestant representatives.

I discovered a vibrant exchange between German and American Protestants. In particular, American Protestant representatives encouraged German Christians to embrace lay, democratic activism, a radical departure from the tradition of German clericalism. They utilized postwar relief as leverage to encourage these reforms. Germans incorporated these theological reforms and began to emphasize the role of the laity in church affairs, the centrality of international ecumenical relations, and the need for an active public role in the civic sphere. All of these initiatives were designed to help prevent the rise of another totalitarian order in Germany. As such, these religious reforms prepared German Protestants to take a more active role in public affairs and to fashion a more democratic civil order. Yet Germans also pushed back. Although they forged a relationship with the Western powers, they also contested certain American military policies, such as indiscriminate denazification, and used their expanding public role to push for the unification of Germany and the continued demilitarization of Germany. In these ways, religious connections provided a foundation for a strong transatlantic partnership between the United States and Germany in the postwar context. Religious actors and ideas also prepared Germans to experiment in democratic practices and prevent the rise of another totalitarian order.

Beyond illustrating the centrality of religion in postwar reconstruction and the reconstitution of civic space in postwar Germany, my research also offers some new findings in the fields of religious history. In particular, my research illustrates that there was an American influence on German religion in the postwar period. Scholars have argued that Germany’s turn towards liberal and activist religion did not occur until the 1960s and 1970s, when Germany’s student generation came of age and wrestled with the legacy of their parents’ past. Yet I now aim to show that the postwar period provided a foundation for this massive change. The roots of activist religion can be seen in the American effort to reform German Christianity after the war. More broadly, this finding strengthens the trend of transnational history and revises historical narratives that treat American and German history as iron-clad cages, impenetrable to external forces. My project shows the interconnection and interdependence of national histories in the postwar period.

The support of the Nanovic Institute has proved immeasurable in the pursuit of my doctoral studies. As a transnational project, my dissertation would not be able to take its complete shape without extensive research in Germany. Nanovic fulfilled this pressing need. More specifically, the grant enabled me to complete the research that will translate into four dissertation chapters — well over half of my dissertation. Furthermore, the grant provided me the opportunity to engage with German archivists and learn from their knowledge of the collections. Once on site, I discovered new collections and expanded my knowledge in the field. Finally, while in Germany, I had the opportunity to meet with other German scholars and forge connections with faculty and students at the Universität Bielefeld, the Freie Universität, and Humboldt Universität. Nanovic helped connect me to a broader transnational network of scholars, which will prove invaluable in my scholarly career. For all these reasons, I am immensely grateful for the support of the Nanovic Institute and for their generous backing of doctoral research.