Catherine Kuiper, a doctoral student in Political Science, traveled to Rome with the help of a Graduate Summer Travel and Research Grant. With her grant funding, she delved into the medieval roots of modern politics by researching Francisco Suárez, one of the last great scholastic philosophers. A near contemporary of the more famous John Locke, Suárez is significant for his adaptation of Thomistic philosophy in the rapidly changing world of early modern Europe. Catherine recently wrote to us about her research:

From the late 15th to the early 17th centuries, an array of scholastic philosophers at the University of Salamanca brought the medieval natural law tradition to bear on a range of modern problems: the colonization of the New World and the rights of native peoples there, the aftershocks of the Protestant Reformation and the rise of the nation state as the dominant political form, and even the economic changes that befell Spain after colonialism. Francisco Suárez, S.J. (1548-1617) was a key figure in this School of Salamanca whose work was widely read and very influential during his lifetime. While he continued the ancient Aristotelian tradition—arguing that man most fully flourishes through political life—he also introduced modern concerns to the scholastic reading of Aristotle by giving a central place to the role of consent in forming political communities and to the rights of individual citizens within them. Unlike his medieval scholastic predecessors, Suárez wrote in response to and on behalf of the nation states that had already begun to form what we now know as Europe. On account of his place in time and intellectual history, I argue that Suárez is a bridge between the medieval and modern schools of political thought, using medieval philosophy to confront the problems of the modern world.

This position is in harmony with Brian Tierney’s effort to trace the origin of modern human rights to the traditional of medieval scholastic philosophy and jurisprudence. I disagree with such philosophers and political theorists as Alasdair McIntyre and Charles McCoy, who portray Suárez as definitively modern and indeed partly responsible for modernity’s rejection of medieval tradition. In particular, I resist John Finnis’ critique of Suárez on the Natural Law; I argue that Suárez’s changes to the Thomistic theory of Natural Law serve as helpful clarifications and do not alter the core of the teaching. 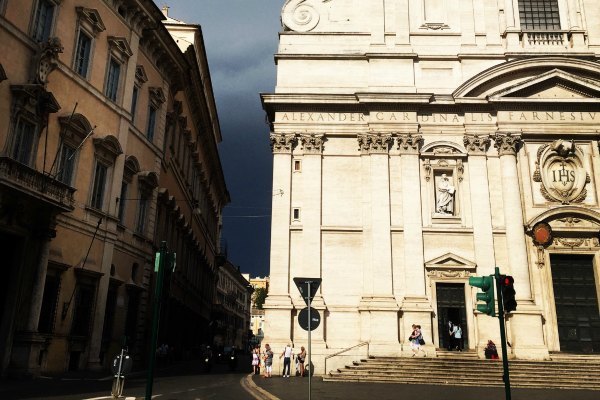 Thanks to the Nanovic Travel and Research Grant, I was able to travel to Rome this summer to investigate primary source material at two different archives: one at the Jesuit Curia and one at the Pontifical Gregorian University. At the Curia, I searched through their files on the Jesuit order in Spain to find any letters from Suárez that might have been preserved. In all, I found over twenty letters from Suárez in the Spanish file. They primarily dealt with everyday matters such as policies within the Jesuit order, his health problems, and his concerns about continuing to run a school with insufficient funds. The letters are in Spanish. I transcribed several and purchased several copies of others, including an account of Suárez’s decision to join the order. While I have not completely translated all of them yet, I am keenly interested in the picture they will afford of his personal life. At the Pontifical University I had access to a number of commentaries by Suárez on different parts of Thomas Aquinas’s Summa Theologiae. I chose to center my attention on his commentary on question 7 of the Prima Secundae, which discusses human action. Because of the volume of material available here, I focused on transcribing as much as I could of the Latin text and plan to spend the next few months translating it.

I believe this research trip had immense significance for my dissertation and for any further research I will conduct on Suárez. Because of the limited biographical resources on Suárez, the letters will provide truly invaluable information about his activities and preoccupations. Meanwhile, the topics covered in the commentary I was using are of tremendous importance to the history of practical reason in philosophy, which also bears on political theory. Suárez tied consent and human will to the legitimacy of political regimes in a way that had not been done before by scholastic philosophers. Part of this move was linked to his conception of freedom of the will as a separate activity from practical reason. Whereas previous accounts described will and choice as the end result of a chain of practical reasoning, Suárez’s account portrays will as a separate activity, a decision to do or not to do something after the reasoning has happened. This crucial difference makes his response to Aquinas on voluntary action a particularly vital adaptation to understand.

This research trip was also a valuable experience for my own development as a scholar. I had never used library archives before and was able to learn about the procedures for requesting and using manuscripts from the sixteenth and seventeenth centuries. Since my research focuses on this time period, this first hand education will be a helpful investment moving forward. Although I have never taken a paleography class, I was able to use this experience as a way to learn about shorthand techniques from this time period. I am now much better prepared to read a handwritten document from my chosen era of study thanks to this research trip.