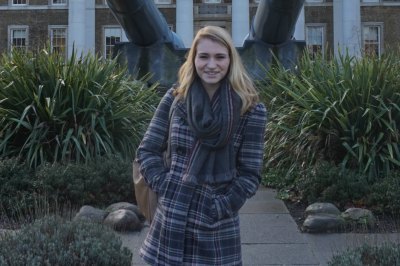 Good research begets good research. Caitlin O'Connor ('16), a History major, received a Summer Travel and Research Grant from the Nanovic Institute to conduct thesis research in London last summer. Her summer trip created further questions and areas for exploration for Caitlin, though, and so she applied for and received a Senior Travel and Research Grant to return to London during fall break. Caitlin recently wrote to us about her experience:

For a week this winter break I had the opportunity to return to the archives of the Imperial War Museum in London, where I had spent three weeks the previous summer researching officially sponsored British photography during the First World War. My research in the summer was largely exploratory, as surprising little research has been done on government-sponsored photography of this war. This visit, however, I was returning with a very specific question. Over the course of my research during the fall semester, I discovered that the Daily Mail had published a series of colorized postcards in 1916 after winning a competition sponsored by the Official Press Bureau. I found these postcards particularly interesting as they provide an example of how photography can be changed and altered so that it becomes not just an image that relays “fact” and information but an image that seeks to commemorate and to facilitate remembrance of its subject. During my week at the Imperial War Museum I was able to catalog the complete series of 176 images in an album created and sold specifically to display the images.

I cannot stress enough how much I learned by viewing the images first hand as they were originally intended to be viewed and collected, rather than the two or three images that I had first found in a published book. As soon as I saw the album for the first time, my way of thinking about these images changed entirely. I had expected the postcards to be almost reverential in their commemorations of the war scenes that they depicted. However, the lettering on the cover of the album alerted me immediately to the fact that it was a much different type of commemoration.  It was a typeface that reminded me of the lettering that one would find at the beginning of an old fashion action movie. And the captions that accompanied the images on the postcards soon reinforced this. These images were created to celebrate the war and the British soldiers’ efforts, rather than to facilitate a mournful remembrance of the events they depicted.  There was an air of military kitsch about the entire series, and had I not had the opportunity to view this complete series I might have misinterpreted the postcards’ intended meanings and audiences. This discovery has helped me to consider other ways in which photography contributes to the remembrance of an event.

Further, this trip allowed me to revisit some materials that I had examined over the summer and provided me with new insight and primary sources to utilize in my thesis. Archives can, at times, be a confused and chaotic place, and I am so grateful to have had an opportunity to revisit the Imperial War Museum after I had familiarized myself with their holdings and their archival system during my summer research. I was able to navigate through materials much more quickly, and I also understood the process of archival research in a much more realistic way. Rather than attempting to skim through as much material as I possibly could in hopes of finding “perfect” pieces of evidence, I took my time trying to decipher handwriting and thinking critically about how a document might fit into the narrative of my thesis. Because of this more meticulous searching, I came across a series of correspondence between the Museum and the Photographic Bureau that I had previously missed. The letters contain, among other things, a discussion of what type of photographs should be included in the museum created to commemorate the war, and this sort of discussion greatly enhances my argument.

I am so grateful for the way in which the Nanovic has allowed me to deepen my thesis exploration and seek out primary sources upon which I can base my argument. I know it will greatly strengthen the final product.