Our director, William Collins Donahue, says that "One of the most gratifying things about teaching at Notre Dame is the opportunity to observe the intellectual and spiritual growth of our students."

As a hallmark in the mission of both Notre Dame and the Nanovic Institute, we delight in watching students of all disciplines develop their skills, heighten their curiosities, and push their ambitions to realize their dreams. A mechanism that enables students at any stage of their academic careers to accomplish this is the comprehensive suite of grants and fellowships available through the generous benefactors of the Nanovic Institute.

After their return, students submit reports and images from their Nanovic-funded experiences. Below are just some of the many stand-out stories found in our latest Student Testimonial booklet. 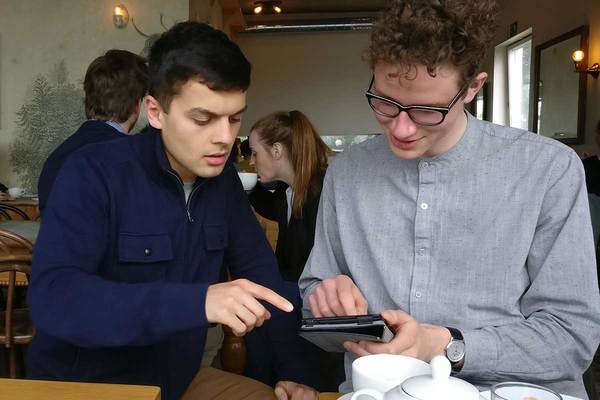 Adam Kulam ‘19
Economics and English
The R. Stephen and Ruth Barrett Family Endowment for the Nanovic Institute Winner of the Barrett Prize for Best Undergraduate Proposal

Iceland suffered one of the worst bankruptcies in history after the Global Financial Crisis of 2007-2008. In response, the Icelandic government prosecuted and incarcerated bankers, politicians, and CEOs after the crisis—the only Western country to do so. Adam Kulam went to Reykjavík over the summer of 2018 to measure public risk preferences in finance and to test how they vary as financial legislation changes or other political events unfold.

“In addition to the financial backing, Nanovic provided the inspiration for my research product and recommended contacts to me. This summer will stand out as the most thought-provoking endeavor during my time at the University of Notre Dame.” 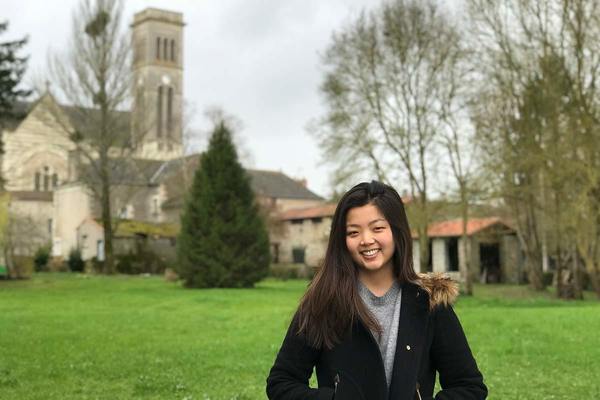 Since 2005, one hundred and forty châteaux in Bordeaux were sold to Chinese investors. What effects, if any, has this foreign direct investment had? This sell-off certainly marked a shift in French culture, since châteaux have always represented a family brand. Would wine-making practices change? Would export destinations change? Would the Chinese learn how French wines are made in order to replicate them in China at a lower cost? Would French consumers buy French wine made by Chinese owners? These are all questions at the heart of anxieties about globalization.

“Laura’s project brings to light the benefits of an interdisciplinary major, combining the study Economics and French language and culture in a way that produces applicable and valuable outcomes.” 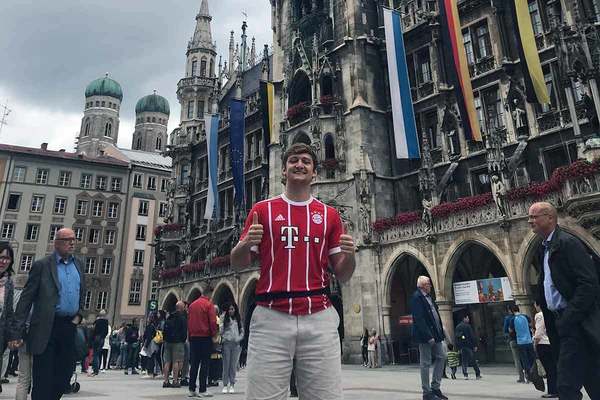 Why would Chevrolet agree to spend $559 million to put its name on the jerseys of Manchester United’s soccer team when Chevrolet only expected to make $80 million a year on the deal?

As a marketing major, I knew the basic components of value creation but wondered what was driving companies like Chevrolet to invest so much. During my summer of research in England, Germany, and Italy, I came to two conclusions. First, sponsorship decisions are driven by the demographics and location. Second, the exponential growth in global sponsorships is being driven by a dozen or so elite teams in European soccer clubs that have become global brands. Learning from experts and gaining information not available to the public from within European soccer clubs was transformational for me. My research also made me develop life skills that I had to develop on the go.

“This grant taught Mick lessons that he will carry with him far beyond his time at Notre Dame. On top of the countless interactions that helped form who he is becoming as a leader and as a person, Mick gained great insight into the future of sports marketing and how sports marketing caters to cultural values.” 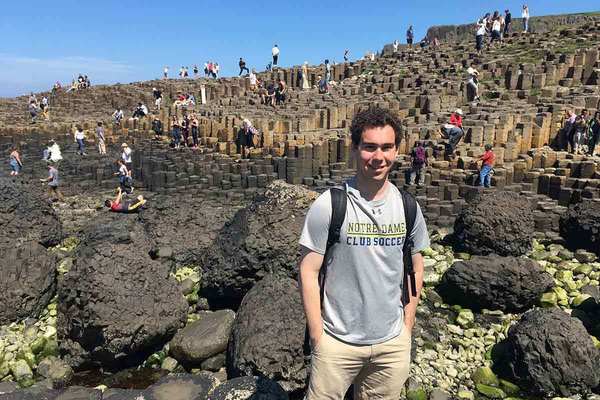 The British and the Irish both have national healthcare services, but how do they differ, and how do they compare to the model of healthcare in the United States? By conducting in-depth interviews with medical professionals in London, Dublin, Belfast, and Edinburgh, I learned how each system worked, how they were problematic, and what aspects would be potentially transferable to healthcare in the US. I also learned how to engage myself in professional settings in a totally new environment. I struggled with this at first, but I not only achieved my academic goals but feel that I grew and matured. It was a wonderful way to experience Europe for the first time. 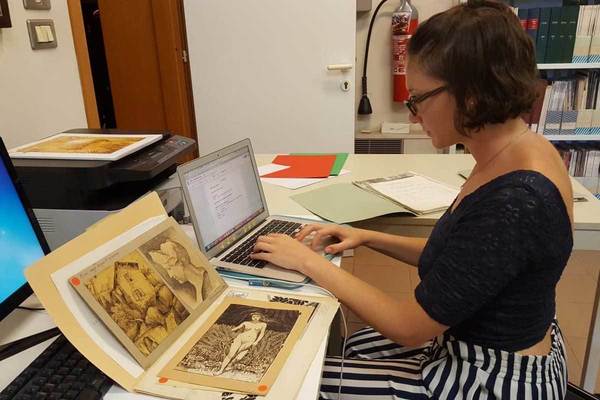 This past July, I was an intern at the Civic Museums of Ancient Art in Bologna, Italy. Specifically, this internship was under the guidance of Giancarlo Benevolo, curator of the Museum of Textiles and Tapestries. I prepared specialized guided tours, translated documents into English, and cataloged antique books in the historical archives. The translation work I did on a book of photography on a fountain of Neptune will be published, and I will receive official credit. Before working at this internship, museum curation was a field I never thought would seriously interest me. However, I have been surprised by how personally interested and passionate I have become about the work I am doing! 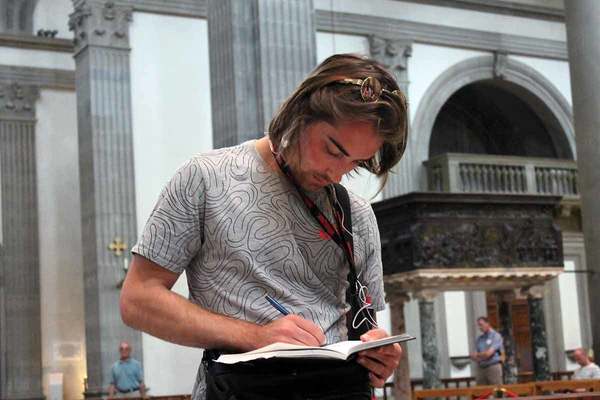 In the late nineteenth-century, there existed a remarkably unified group of artists working in all kinds of media — architecture of greatest interest to me — who rejected the approach and authority of institutions like the Académie des Beaux-Arts in Paris. There is a period in the aesthetic history of Europe then between Neoclassicism and Modernism that offers a rich but relatively-unexplored language and set of design decisions about materials, style, iconography, minimalism, and adaptation of classical forms. This period could be called “secessionist.” Vienna contains especially vivid examples of this approach, so I spent the entire month of June visiting, reading, drawing, and talking about it so as to write a senior thesis that will provide the foundation for my further study and practice of architecture. 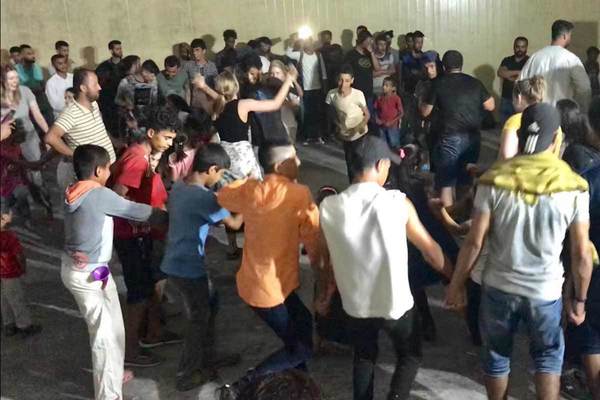 Located only miles from the Turkish coast, the island of Lesvos (Lesbos) has been a main thoroughfare for migrants and houses Europe’s largest refugee camp. I worked there this summer for an NGO called Refugee4Refugees, founded by a Syrian refugee. With my limited Arabic and their limited Arabic, we communicated in ways that pushed me to think critically about my experience. Our work on the ground for example made me keenly aware of NGO politics: small non-profits must compete for the same limited resources and project areas, often creating friction rather than cooperation. The best way to understand the operations and roles of organizations in this complex web is to situate yourself within this ecosystem. I am now better informed and better equipped to address this global issue. 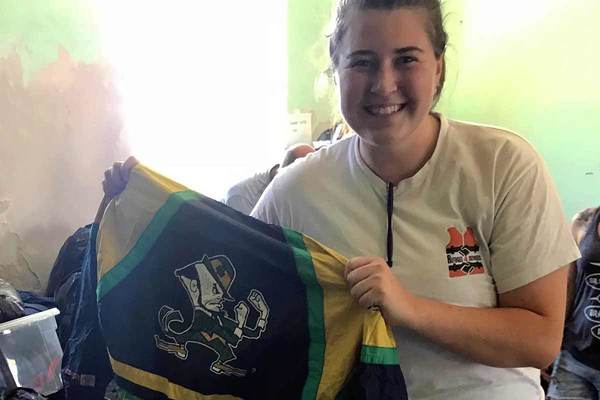 “While sorting clothing donations I came across this Notre Dame jacket! ND truly has a global reach! Go Irish!”