Aspiring scholars also need to turn their dissertations into successful first books. At the Institute, we know that such projects often come out of the experience of doing significant original research, which takes time. Research can take many forms: deep dives into manuscript archives, unprecedented gatherings of primary materials, chasing down key historical records, and first-person investigation of new social phenomena. The results open new doors of opportunity.

Applications for the Nanovic Institute's Graduate Academic Year Travel & Research Grant are accepted throughout the academic year until April 2, 2018, or funds are depleted.

I was told at the end of my extensive vetting process at the Vatican Library that my visitor privileges may be renewed at any time in the future based on my present admission. 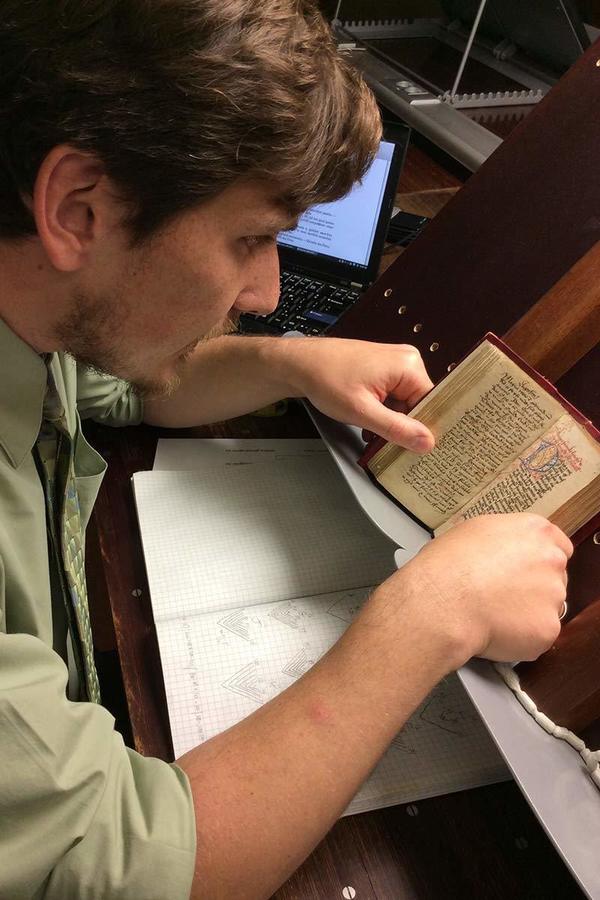 Making a Manuscript Bestseller before Gutenberg

Today, more than eight-hundred handwritten copies of Thomas à Kempis’s spiritual classic, The Imitation of Christ, survive from the period before print.  This raises important questions about the way books like it were spread.  How did these books become such bestsellers without mechanical technologies that automated the mass distribution of information? This summer, the Nanovic Institute funded research for my doctoral dissertation that helped to explain how this particular work, written by an otherwise unknown priest in the Netherlands during the 1420s, quickly became an international bestseller in the decades before printing technology appeared.  This research seeks to examine as much of the surviving manuscript evidence as possible in order to find out when and where each was copied, by whom, under what conditions, and using what sort of materials.

While scholars have acrimoniously debated the authorship and early manuscript evidence of this work for more than four centuries, most recent studies have found that the earliest manuscripts began circulating after 1424 among informal religious communities in the Netherlands (collectively known as the Devotio Moderna).  A decade later, the work spread through a major Church council in Basel (1433-1437), where clergy and laypeople from every part of Catholic Europe were gathered.  From this one international gathering, the little book was swiftly carried to every corner of Europe, and continued to be copied in every part of Europe until print editions began to saturate the market in the 1480s.  While the outlines of this story are generally accepted among scholars, no one has sought to understand the dynamics of this international book market as a social network, composed of individual agents working in a distributed way within discrete circles.  By studying these books materially, I am uncovering important information about where each came from and why they were made.  More often than not, the provenance of each copy can often be linked to one of a small number of religious govements, like the Devotio Moderna, the Carthusian Order of monks, or groups of reform-oriented monks in Austria and Italy.

Thanks to the support of the Nanovic Institute, I was able to spend three weeks working at two European libraries: the Vatican Library in Rome, and the Royal Library in Brussels.  These two libraries together preserve about seventy manuscripts, about 9% of the total surviving evidence I have identified.  I was also able to acquire numerous microfilms from other libraries to which personal travel would have been cost prohibitive.  Each manuscript I examined yielded new information missed by previous researchers—and in a few cases, some manuscripts had not been examined for centuries! New evidence often came in the form of colophons, which are brief notes written by scribes that give the day, year, and sometimes the name of the copyist.  In other cases, the provenance of a physical volume was indicated by an ownership mark written by a fifteenth-century librarian.  For about half of the manuscripts, the original fifteenth-century binding has survived intact, and this provides a whole dimension of information about the physical construction of the book: some manuscripts were carefully planned and executed from the start to contain a certain number of “books” within one volume.  In other cases, the copying of the Imitation was more haphazard: sometimes a single volume contained different stacks of paper copied over a long time with various works.  The contents often came from more than one scribe and may not even have been intended to be bound together.  Both types of manuscripts shed light on the degree of formality with which a work was published in their respective regions.  For example, in Italy, most copies were more formally “published” as individual volumes according to the standards of professional scribesª in Belgium, the majority of copies were copied in miscellanies made non-commercially for personal use.

The opportunity to perform this research early in my dissertation writing process has been a great help in furthering the timely completion of my dissertation.  While I continue to seek opportunities for further research to expand my modest sample of the extant body of evidence, I was already able to gather a fairly substantial amount of data.  This research was also valuable in that it allowed me to refine my data collection process for maximum efficiency of time and resources.  From this experience, I gained both expertise and confidence in the methods I have established that will enable me to achieve my dissertation goals in the remaining time of my degree.

Beyond merely furthering my research, the Nanovic Institute grant has furthered my professional development by helping to forge professional contacts at two of the world’s foremost centers for the preservation of pre-modern manuscript books. Importantly, I was told at the end of my extensive vetting process at the Vatican Library that my visitor privileges may be renewed at any time in the future based on my present admission.  Moreover, during my three weeks at the Royal Library in Brussels, I had the good fortune of making the acquaintance of numerous scholars and staff members there, including an editor of a leading journal of manuscript studies.