The Nanovic Institute for European Studies was honored to welcome His Excellency, the Most Reverend Claudio Gugerotti, the Apostolic Nuncio to Great Britain and the Titular Archbishop of Rebellum, to present the Keeley Vatican Lecture on Wednesday, September 21, 2022. In a deeply moving and personal lecture titled “My Contacts with Saint John Paul II at the Fall of the Soviet Union,” Archbishop Gugerotti shared some of the contacts he had with the Holy Father in the context of the final years of the Soviet Union.

The lecture, which was moved to an online format due to His Excellency’s attendance at the state funeral for Her Majesty Queen Elizabeth II, was introduced by Clemens Sedmak, director of the Nanovic Institute and professor of social ethics in the Keough School of Global Affairs. Sedmak explained the Nanovic Institute’s particular interest in Central and Eastern Europe, in the role of Catholicism in Europe, and in “personal encounters, creative research, and formative experiences.” In these ways, Archbishop Gugerotti’s unique experience of working with and on behalf of the then Pope John Paul II has particular relevance for the institute and its students, faculty, and wider community.

The Nanovic Institute has prepared an event brief that provides a brief survey of some of the highlights of Archbishop Gugerroti’s lecture, conscious that His Excellency recounted these contacts with Saint John Paul II with a richness of detail and depth of emotion that is impossible to replicate in writing. The institute invites you to rewatch this lecture on Nanovic’s website or YouTube channel. 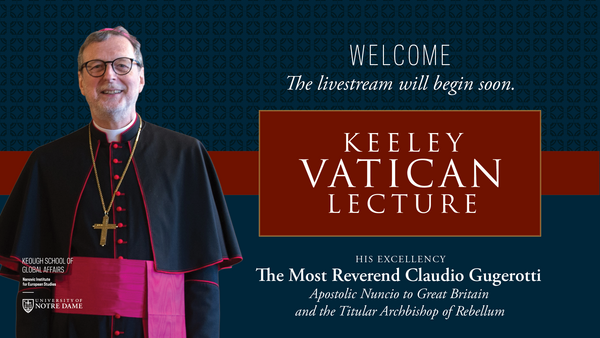