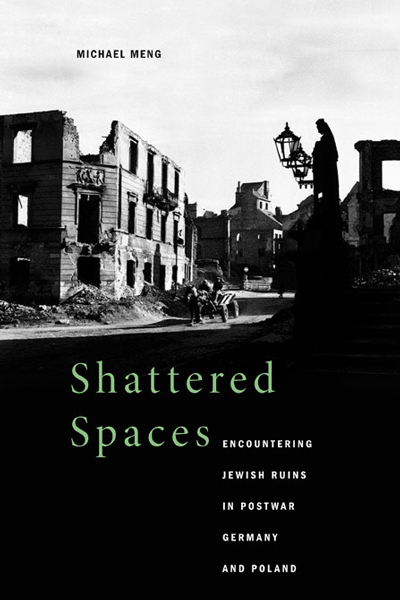 2013 Award in History and Social Sciences

Michael Meng’s compellingly written and moving study demonstrates how the development of “Europe” as a whole interfaced with the problems of dealing with the physical remnants of Central European Jewish civilization. His work examines the fate of Jewish ruins and remains in Poland and in Germany—East, West, and reunited—from the end of the Second World War until the present. With inventive and original research on the history of Jewish buildings and religious sites in five cities—Warsaw, Wroclaw, Berlin, Potsdam, and Essen—Meng is able to trace the arguments and plans of the decision-makers who determined whether synagogues, community centers, cemeteries, and housing blocks, would be demolished, allowed to disintegrate, or refurbished for other functions. Meng analyzes the important transformation of memory culture in the 1970s and then again after 1989, when, under the influence of what he calls “redemptive cosmopolitanism,” Jewish sites were preserved and have been built anew, to the point where we have beautiful synagogues and impressive historical museums and memorials in both Poland and Germany. In Shattered Spaces, Meng offers important and illuminating insights into why these crucial shifts happened. He brings to this task a broad-ranging understanding of architectural history, urban planning, and postwar European issues of memory and forgetting

Lecture: “Why Do We Remember? On the Ambiguities of Cosmopolitan Memory in Contemporary Central Europe”