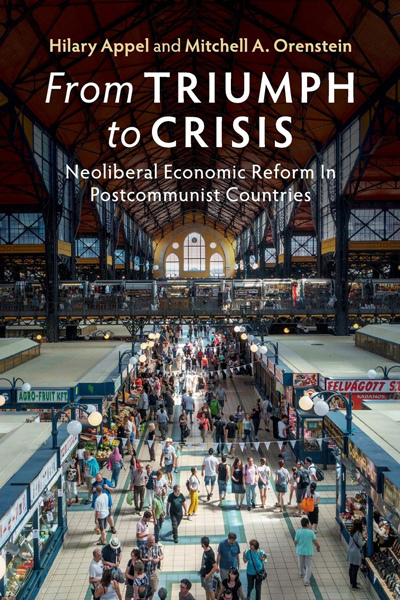 Hilary Appel and Mitchell A. Orenstein

From Triumph to Crisis: Neoliberal Economic Reform in Postcommunist Countries

by Hilary Appel and Mitchell A. Orenstein

A highly important and original book, From Triumph to Crisis offers a comprehensive and empirically rich account of economic reform in European post-communist countries. More notably, it also pursues an innovative and critical approach to classical interpretations of pertinent transformation processes from communism to neo-liberal capitalism.

Hilary Appel and Mitchell A. Orenstein challenge the much-vaunted theory of a post-communist “cultural embrace” of neo-liberalism after decades of state-led economic policy. They convincingly demonstrate how much such an embrace was driven by post-communist governments’ need to compete for foreign direct investments to (re)build their national capital stocks. In the pursuit of this goal, governments resorted to the instrument of “competitive signaling” of their neo-liberal reforms to global financial markets. However, the story does not end here. Appel and Orenstein offer an intriguing sequel as they show how post-communist governments, once they deemed their mission completed, at least partially reversed neo-liberal reforms to guarantee better social security to their electorates.

A compelling work that goes beyond the state of the art in transformation theory, this book will spark debates within and without academia and inspire new research agendas. It should be read by social scientists and policymakers alike.