Four Notre Dame students had the meeting of a lifetime.

With the support of the Nanovic Institute, Sarah Bueter (’18), Christopher Collum (’18), Bridget Rickard (’18), and Chris Haw (Ph.D. candidate in Theology & Peace Studies) traveled to Vatican City in November 2017 to meet Pope Francis and attend a conference on nuclear disarmament.

They joined thirteen other Notre Dame students, faculty, and alumni to participate in the first international gathering on nuclear disarmament since the Treaty on the Prohibition of Nuclear Weapons was signed by 122 countries at the United Nations in New York on July 7, 2017. The conference, entitled “Prospects for a World Free from Nuclear Weapons and for Integral Disarmament,” was attended by over 300 participants, including Nobel Peace Prize Laureates, United Nations and NATO officials, heads of major foundations and civil service organizations, survivors of nuclear bomb attacks, and many nuclear arms experts and scholars. 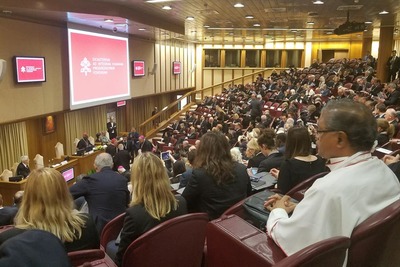 The participants gathered for two days to listen to key figures in the disarmament community, engage in dialogue during break-out sessions, and build relationships between sessions. 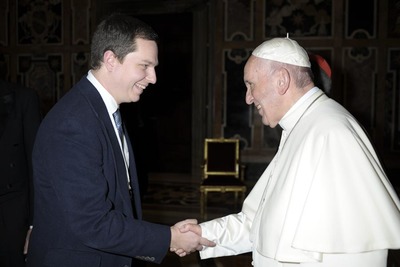 In addition to speaking at the conference, the Pope individually greeted each participant. As Christopher Collum explains, this was an incredible surprise: “We were told prior to the conference that we would have a group audience with the Pope, but we did not know that he would stand there and shake our hands, individually greeting all 300 of us.”

“In person, the Pope had that reputed kindness and glow about him,” Chris Haw notes in a letter to the Observer. “But,” Haw adds, “on this occasion, at least, he spoke with unflinching gravity, visibly bearing a burden of our global tensions and conflicts.” In the past, Haw explains, popes and bishops have condemned the use of nuclear weapons to indiscriminately target non-combatants. But, in light of the recent breakdown of diplomacy between nuclear powers and the increasing desire by some non-nuclear nations to develop nuclear weapons, the Pope decided to condemn not only their use, but also their possession. 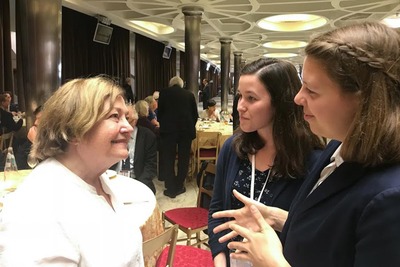 In addition to meeting the Pope, participants had the opportunity to converse with prominent peace activists. For Sarah Bueter, speaking with Mairead Corrigan Maguire—founder of the Northern Ireland Peace Movement and recipient of the 1977 Nobel Peace Prize—was a powerful encounter. “When meeting her, Ms. Corrigan Maguire gave us her full, dedicated attention, as if we were the most important people in the entire conference. She kindly placed her wisdom and experience at our disposal. As a young student and activist, I was profoundly touched by Ms. Corrigan Maguire’s attentiveness and commitment to every person, whether she be a lowly student or a world-renowned expert.”

(More of Bueter’s reflections on the conference can be found in a blog post she wrote for the Nuclear Threat Initiative.)

Other participants had powerful experiences during the conference that they were eager to share. Chris Haw brought addresses he heard during the conference to his War, Peace, and Revolution class at Notre Dame and discussed them with his students. “The conversations that followed,” he says, “proved to be fruitful and directed student attention toward one of the most pressing concerns of our day.” Haw also shared his thoughts about the conference during a panel discussion at Notre Dame. 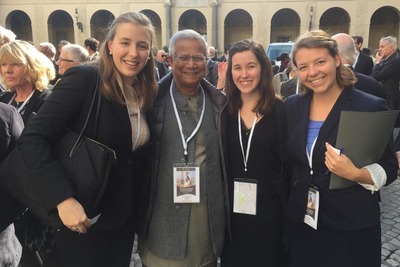 For Bridget Rickard, the conference left her feeling encouraged by the church’s leadership and empowered to fight for nuclear disarmament. “The conference reaffirmed for me that the Holy See is to the world a moral authority, and that its participation in global policy debates is mostly welcomed by the international community insofar as it calls those in positions of authority and influence to account and to exercise their power for the common good. I look forward to building on the momentum for nuclear abolition created at the conference on our campus, as well as to potentially working on this issue in a professional capacity.”