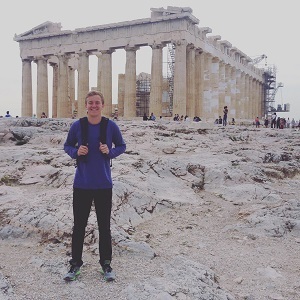 Let's welcome Vince Vangaever ('17) back to the Student Spotlight! Vince, a double-major in Finance and Political Science, received a grant from the Nanovic Institute to intern at the Dutch Development Bank in the Netherlands last summer. While there, he was exposed to the Dutch perspective on the Greek economic crisis. This piqued his desire to travel to Greece to learn more about the crisis from a Greek perspective. He received a Break Travel and Research Grant for Sophomores and Juniors in order to embark on this research venture, and enjoyed a productive fall break in Athens. Vince recently wrote to us about his experience:

Thanks to the Nanovic Institute for European Studies at the University of Notre Dame, this fall break I was able to travel to Athens, Greece to spend the week researching the economic situation plaguing the country. During my time in Greece I was able to meet people from diverse fields including economic research, academia, government and finance. These individuals were able to give me a concrete background on how the Greek economy reached its period of economic calamity and a strong idea of what the direction forward for the country may be. In addition to the professionals, some of the most informative conversations I had were not with academics at established and preplanned meetings. During my week I spent a good deal of time speaking with strangers in cabs, cafes, and restaurants in Athens, hearing the perspectives of the general populous and learning a tremendous amount about Greek society.

Overall the economic crisis has hit the population hard. With unemployment at above 25%, and rates reported as high as 50% for youths, the people of Greece are frustrated and defeated. The radical leftist party Syriza leads the government, which was just re-elected at the end of September. They are headed by the Prime Minister Tsparis who has earned scorn and praise from across the international community for his handling of the height of the crisis in late June and early July. His government is currently in the middle of negotiating the terms of further EU and IMF assistance but has largely resisted the larger structural changes the country requires in order to emerge from economic ruin and return to relative stability.

One of the biggest questions, which I received a wide diversity of opinion on, was how the Greeks actually found themselves in this predicament. Several suggestions were offered, be it joining the EU too early, practicing dangerous protectionist trade policies, or gratuitous borrowing. In the end the likely answer is that is was a combination of all of these factors that led to the dangerous collapse of the economy as early as the financial crisis and all the way through until today.

The path forward is an equally challenging question with equally as many different answers. I spoke with some who still feel as though a “Grexit,” a departure of the country from the European monetary union and the implementation of the drachma would be a preferable outcome to the strangling impositions posed on the Greeks by the EU. However this is not a solution I agree with. While there would be short-term benefits perhaps, the longer-term structural issues that plague the economy and country as a whole would still remain.

While it may be naïve to offer my opinion after only a short week of research, it is clear that larger changes than just fiscal decisions and renegotiations of debt are necessary. The Greek economic system as a whole has dangerous cracks that must be stemmed, including poor public sector services, a convoluted and complex tax structure system, and a confusing and unorthodox welfare state. The Greeks will need to make difficult decisions over the coming 12 months in order to secure their long-term future. I look forward to continuing to follow the situation in the country.

In addition to my research, my time in the country also allowed me to visit sights like the Parthenon, the Temples of Hephaestus and Zeus, and the Monastiraki. Some of my favorite parts of the trip involved simply walking around the beautiful old city of Athens and taking in the environment around me. I was exposed to the Greek café culture and was able to enjoy traditional Greek meals throughout the week. I am very thankful to the Nanovic Institute for providing me with the opportunity to explore such an interesting political and social climate with some fantastic cultural landmarks as well.