Victoria Ellyn Lew ('17) is a double-major in Political Science and Peace Studies. She received a Break Travel and Research Grant for Sophomores and Juniors in order to conduct archival research in Paris. Not only did Victoria learn about her topic, she also gained academic and cultural experience and increased her confidence in her own ability to conduct independent research. She recently sent us an account of her experience: 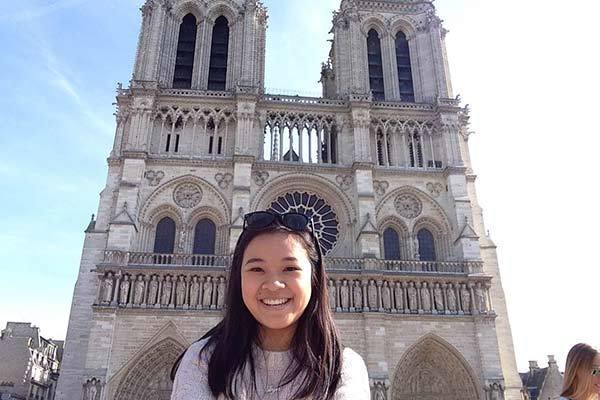 My research conducted in Paris, France lasted for a week in early March and was done via analysis of historical texts at the Bibliothèque Historique de la Ville de Paris (BHVP). These texts constituted a group of personal journals written by French women during the years of the German Occupation during World War II. While I arrived in Paris with a hope of discovering a relationship between social class standings and measure of acceptance towards Nazi occupation, my findings at BHVP narrowed my scope of research towards the experiences of French women under the occupation, including how wealth affected their sympathies towards German victory. The lessons I gained while researching in Paris proved to be dualistic in nature—I not only learned the methods of adapting to the multi-faceted nature of doing research, but also furthered my conversational and formal French language skills.

Upon gaining a library membership at BHVP, and after going through an extremely lengthy process of obtaining books that I had researched for my proposal’s bibliography, I soon realized that the wealth of information at my hands would not lead to an easy answer to my research question. In fact, with so much material to make my way through, I realized that my research scope was much too broad if I wanted to formulate strong analyses of my findings. As a first-timer in pursuing research, my experience at BHVP showed me how flexible one must be when utilizing a great number of sources that contain information one might not have even thought of when proposing a research topic. It truly takes a great amount of independent thought to be able to utilize texts and resources in a way that is purposeful for your own project. In the case of my own work, my research really found its focus when I limited my bibliography to only female-written work based upon firsthand accounts of the German Occupation. This decision allowed me to essentially put on blinders and deeply analyze the works in front of me. Delving into these female wartime narratives led me to the conclusion that besides the exception of having a family member (usually a male family member) directly involved with the fighting and war, being a member of the upper class in French society did indeed lessen the tension of living under Vichy rule and created more sympathy towards Nazi soldiers occupying the city. Reading accounts of the war from girls in their adolescent years to women at their youthful peak to older mothers, I was so very aware of how lucky I was to be sitting in Paris and turning pages that crinkled with age and told stories of people who had struggled in the very place I was now doing research.

The entire experience of living and working in Paris has been one of the most rewarding times as a Notre Dame student thus far—this opportunity that the Nanovic Institute afforded me has allowed me to gain experience in pursuing original research, and helped further my interests on the implications of war on the human narrative. While fearful of exploring an academic passion in Europe where English is not the first language, this trip ultimately proved to me that I am indeed capable of sifting through materials to discover a point of original thought and expand upon a field of study in a way that synthesizes my academic interests with research that already exists, whether that be in English or French. This trip has prompted me to more positively reflect on the prospect of writing a senior thesis and gives me confidence in both developing a focused research topic and remaining adaptable when executing this research. This research grant turned another school break into a meaningful experience for my academic career that will translate to any future research I choose to pursue here at Notre Dame, abroad in London, or anywhere else throughout the rest of the world.Although my main focus was to be a student researcher, it is undeniable that my personal worldview was expanded by living in Europe and being at the center of French popular culture.  Receiving a grant from the Nanovic Institute to pursue academic work in Europe gives you a sense of purpose in the country that you travel to—unlike the experience of being a tourist, you fall somewhere in between the travelers and the locals. In a short amount of time, you learn the city routes from your residence to your research site to restaurants or cafés nearby; no longer just a tourist, the city becomes your own in a way that would not have been possible without Nanovic’s funding. Being in Paris immersed me in French mannerisms and culture, which shifted my mindset away from American norms. I found that everyone, from the hotel employees to the BHVP staff to the Parisian vendors, were very welcoming if you were open to the idea of adapting to French culture. And by doing just that, I was forced to speak only French to everyone I came into contact with. The words, “bonjour” and “bonsoir,” soon became more familiar to my tongue than “hello.” Everyday interactions with both people and places took on a more stimulating quality because everything around me shared common French history and provoked reflections on French values and perceptions. While in the library I furthered my research skills in the context of French texts, on the streets of Paris I was able to explore the dynamics of French living firsthand and make use of my conversational French skills that I had not been able to do previously.