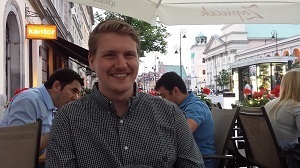 Welcome, Thomas Lis, to our Student Spotlight! Thomas ('16) is a double-major in History and Economics and a Minor in European Studies who received the Katie Murphy McMahon Grant for Russian and East-Central European Studies to conduct archival research in France and Poland last summer. Ultimately, he is working toward the completion of his senior thesis on the Franco-Polish Alliance in interwar Europe. Along the way, he encountered a few surprises and developed academically. Thomas recently wrote to us about his experience:

As Europe moves further towards union, and East and West increasingly integrate, it is important to study the history of European integration in order to avoid past mistakes and learn from past successes. This past summer, I had the opportunity to study one such episode of European accord: the Franco-Polish Alliance of 1921. My senior thesis, tentatively titled “Western Betrayal or A Mutual Separation: Exploring Franco-Polish Relations in Interwar Europe, 1919-1939,” hopes to investigate why this alliance which was considered a cornerstone of both Poland and France’s foreign security policies was so quickly and quietly discarded.

Thanks to the generosity of the Nanovic Institute and The Katie Murphy-McMahon Endowment for Excellence in Russian & East-Central European Studies, I was able to begin research on this project. I travelled to Poland and France to do archival research at the Archive of Modern Records in Warsaw and the Diplomatic Archives of the Foreign Ministry in La Courneuve. I wanted to view the foreign ministry records of both countries in order to get a more complete picture of the diplomatic situation, as most existing research focuses heavily on one side. I looked for differences between what each country’s foreign ministers emphasized and worried about in order to determine whether Poland and France had the same priorities, or ideological and political differences doomed the alliance from the start.

Archival research was a novel experience for me. Never before had I had access to so much historical information. Naturally, I wanted to comb through everything, but by being limited to three weeks in each archive, I was forced to be highly selective in what I read. Despite all the records being in French and Polish, and the technical language of the diplomats, I was able to analyze hundreds of documents relevant to my topic.

Overall, the archival records were extremely enlightening and changed my views on Interwar foreign policy. For example, I had expected to find evidence of French disinterest and Polish distrust after the Locarno Treaties of 1925. However, the sources seemed to indicate that the greatest blow to the alliance came after the German-Polish Non-Aggression Pact of 1934, where France felt betrayed. Furthermore, I was surprised by the importance of personalities, and how certain ministers could completely change the tone of relations between two powers. With these revelations, and many others, I am excited to continue researching and writing my senior thesis.

Even beyond the archives, my trip was very fruitful. I spent six weeks in two of the largest cities in the Europe which provided countless opportunities to experience and learn more about European culture and history. Despite having spent time in both of these countries before, this was my first time alone in their capitals. As both countries are commemorating the hundred year anniversaries of World War I, I had plenty of opportunities to discover more about a great interest of mine. Beyond the numerous museums and monuments, I also had the privilege of attending a dinner hosted by the Polish Academy of Sciences in Paris and engaged with some of Poland’s leading historians.

The time I spent in Europe has greatly furthered my academic development. I had reservations about spending several weeks in archives, but I found myself greatly enjoying the process, especially as I focused the scope of my topic, and wish to do more archival research in the future. I am extremely interested in both European foreign policy and history. The Nanovic Institute gave me a unique opportunity to combine these two passions and, as I go forward, I hope to continue melding these two areas into my career.