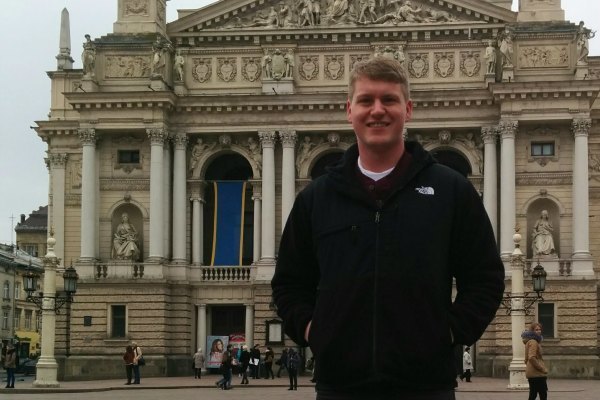 How does an ethnic minority manage to establish control over a larger populace? History major Thomas Lis ('16) received a Senior Travel and Research Grant to travel to L'viv over spring break to study Polish-Ukrainian ethnic relations in the aftermath of World War I. Thomas recently wrote to us about his experience:

World War I led to end of the German, Austro-Hungarian, and Russian Empires, yet the new map of Eastern Europe would not be officially drawn until 1923, five years after fighting in the West had stopped. In Galicia, just like in many other mixed-ethnic areas of the three former empires, different peoples fought to establish legitimacy and control over lands claimed by multiple nationalities. For my European Studies capstone, I hope to explore how Poles living in L’viv interacted with, and justified ruling, the Ukrainian majority in the area.

While the question of ethnic relations in L'viv has been written about in the past, my project is unique in that it uses the local Polish Press rather than state archives as the backbone. Specifically, my project draws on Szczutek (Fillip), a Polish political satire journal. Despite its popularity, very little historical work has been done on Szczutek. Printed locally yet read nationally, it is an excellent source to examine how Galician Poles established their own local identity, yet hoped to integrate with the Polish nation as a whole. Being a satire magazine, it also provides a unique look into public opinion that is missing when relying primarily on government documents.

Thanks to contacts in the Nanovic Institute, I was able to meet with several professors of Ukrainian history, such as Oleksandr Zaitsev and Yaroslav Hrytsak at the Ukrainian Catholic University, and Oleh Pavlyshyn from Ivan Franko National University. They not only provided insight on my project proposal, but also directed me to helpful document sources. The L'viv University Library and the Vasyl Stefanyk National Library proved to be useful, as I was able to read several of Szczutek’s contemporaries to see how the rest of the Polish Press in L'viv dealt with ethnic relations. Not only did this contextualize Szczutek’s opinions and message, but also helped determine any differences amongst Polish social and political groups.

Being able to live in L'viv for a week also gave me lots of insight into ethnic relations in the city. Seeing the living legacies of the Poles, Ukrainians, Austrians, Jews--along with other minority groups--side by side really made me realize just how important of a melting pot L'viv has been through the centuries. The trip really made the project come to life and reinforced the importance of balancing ethnic relations, especially as Europe moves further and further towards integration.

One of the more interesting insights gained from this trip pertains to the audience of the Polish press. While a local paper, Szczutek's focus switched from the ongoing ethnic conflict to appealing to the leaders of the Great Powers. Simultaneously bragging about their self-sufficiency and complaining about the lack of assistance from the West, the Polish Galician identity seems to have been in flux during this crucial period. I hope to explore this dichotomy further as I continue my research on this topic.

Overall, I am very thankful for the support I have received from the Nanovic Institute. Both the grant and their contacts with the UCU were instrumental to the research I was able to complete. As someone who is interested in pursuing a career in history, the opportunity to do hands-on archival research was invaluable.