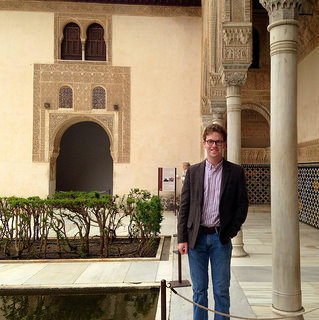 Thomas Boyle is among the Nanovic Institute's first students to return from a summer research trip already!  He is a rising Sophomore majoring in architecture.  With our Summer Travel and Research Grant, Thomas traveled to Spain to conduct research on La Reconquista and Andalusian architecture.  He promptly sent us an account of his trip:

Andalusia is unique place within Europe. Remnants of Roman, Visigoth, Muslim, and Spanish architecture exist alongside one another as markers of the prosperity and rich cultures that have dominated and transformed the area. Thanks to the support of the Nanovic Institute for European Studies, I was able to travel to two Andalusian sites, the Alcazar of Seville and the Mezquita (Cathedral) of Cordoba, to investigate the conversion of these Moorish buildings after the Christian reconquest of Iberia in the Middle Ages and Renaissance. I also visited the Alhambra of Granada, another significant Moorish structure used as a palace for Ferdinand and Isabella, but did not conduct in-depth research on the complex.

In Seville, Spain’s fourth largest city, I encountered a charming historic city center filled with plazas, parks, fountains, and beautiful buildings centered around the fortified Royal Alcazar. Still used as a palace for the Spanish royal family, the complex developed bit by bit over several hundred years. There is a fantastic mix of architectural styles in the Alcazar, including Moorish, gothic, classical renaissance, and of course, Mudejar. The Mudejar style is what occurs when traditional Arabic architectural forms are built for Christian purposes, resulting in a remarkable mixture of aesthetics and cultures. Surrounded by all of this, I got to work. By systematically sketching, photographing, and reading about the site’s post-Reconquista constructions, I developed a unique understanding of the buildings and the subtle unity of the complex. The Alcazar is an architectural marker of over 500 years of Moorish and Spanish history, and my research experience has allowed me to see and understand the site in a more appreciative light.

After three days of study at the Alcazar, I went on to Cordoba, a much smaller city with an architectural history as rich as Seville’s. Founded as a Roman capital of the imperial province of Baetica, Cordoba became the economic and intellectual center of Andalusia under the Moors, and is strewn with well preserved architectural remains from both periods. The city’s most outstanding feature is the Mezquita, which serves as its Catholic cathedral, but was built as a mosque during the city’s Moorish golden age. Famous for its double horseshoe arch hypostyle hall with alternating red and white stones, the Mezquita went through an invasive conversion to a cathedral after the Reconquista. The enormous prayer hall did not serve well for a Catholic liturgy, so a small Gothic nave and an enormous Renaissance nave were added and interrupt the serene rows and rows of Moorish columns and arches. Over 40 smaller chapels were also sectioned off from the prayer hall. Like in Seville, I studied the history of each addition with available literature in the Mezquita, and extensively photographed and sketched. By experiencing and researching the monument in such an intimate way, I was able to understand and appreciate the visible mix of cultures that would not have been possible otherwise.

Perhaps most importantly, I am excited to use my over 400 pictures and 35 sketchbook pages in future designs in school and after graduation. Travel is especially important for students of architecture, because to understand a well designed building, it is best to experience it in person. I think being able to expand my “design palette” through travel is one of the greatest parts of being an architecture student at Notre Dame with access to the Nanovic Institute. I saw many clever and beautiful design solutions Spanish architects have used in Seville and Cordoba, solutions I will emulate in future projects at Notre Dame and beyond.