In the fall of 2012, the Nanovic Institute provided seed funding for the purchase of a significant archive of primary documents that shed new light on the origins of modern Russia. These documents were acquired from Zinaida Leonidovna Polievktova-Nikoladze in Tblisi, Georgia, thanks to the efforts of faculty fellow Semion Lyandres (History). Taras Karaulshchikov, a graduate student in the History department, was selected to assist in organizing and cataloguing the collection. His work fed his research, and from it Taras concluded that he needed to travel to Russia to to continue his line of inquiry. He received The Katie Murphy-McMahon Endowment in Russian and East-Central European Studies to do just that, and his time in Russia was extremely fruitful. Taras recently wrote to us about his experience:

The Katie Murphy-McMahon Endowment in Russian and East-Central European Studies provided me with a wonderful opportunity to conduct dissertation research in St. Petersburg, Russia during the fall of 2015. The research conducted in four major Russian archives has allowed me to collect materials that I will use in addition to the documents available in the Hesburgh library to produce a family biography of the prominent St. Petersburg historian Mikhail Aleksandrovich Polievktov (1872-1942) and his wife, the Georgian chemist Rusudana Polievktova-Nikoladze (1884-1981). This project is significant for understanding the cultural history of the Russian-Georgian intelligentsia during the period from the 1890s to 1940s.

In historiography, the prerevolutionary intelligentsia usually received a political interpretation. Depending on the political stance of a researcher, intelligentsia was depicted either as a radicalized force that contributed to the demise of tsarism in hopes of producing a constitutional government, or, as often was the case in Soviet historiography, as bourgeois elements that colluded with the government in order to prevent the revolution. My research, on the other hand, focuses on the intellectual discourses through which we can study intelligentsia's multilayered identities as scholars and scientists, as Russians and Georgians, as men and women, and as politically conscious citizens. This way we can produce a deeper understanding of intelligentsia’s motives and actions that goes beyond economic and political interests.  It was crucial for me to get into the archives of St. Petersburg to collect necessary materials.

The Central State Historical archive has provided me with detailed Polievktov’s service records between 1890 and 1918 as a graduate student in the St. Petersburg University and later as a privatdozent of the Higher Women Courses and a professor of the Petrograd University. I was able to find the professional records of Rusudana Nikolaevna during the same period. This information allows me to trace Polievktov’s activities and family connections before and immediately after the 1917 Revolution.

In the Russian National Library, I researched the correspondence between Polievktov and his academic advisor Sergei Fedorovich Platonov, as well as between Platonov and other Polievktov’s colleagues covering the extensive period between 1890 and 1927. The data obtained from these letters enables me to reconstruct not only the everyday living experiences of historians, their intellectual endeavors, but also how the academic networks and safety nets functioned before and after the Revolution. Additionally, I discovered a very interesting correspondence between Rusudana and Anna Ostroumova-Lebedeva, a famous artist and the wife of Sergei Lebedev, the inventor of the first synthetic rubber, who was Rusudana’s academic advisor. Rusudana’s letters found in the Russian National Library supplement the letters written by the Lebedev couple available in the Hesburgh Library. This correspondence provides evidence on the viability of the prerevolutionary intelligentsia culture, and the means the intellectuals used to cope with the Soviet reality. 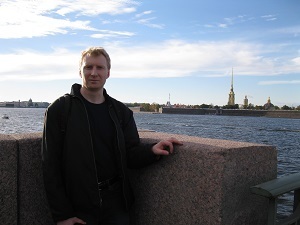 I researched additional correspondence by Polievktov and his wife in the Historical-Scientific Archive of St. Petersburg Historical Institute of Russian Academy of Sciences. This correspondence contains evidence on the patron-client relationships that existed in academia during the early Soviet period. Mikhail Aleksandrovich and Rusudana Nikolaevna depended on the support of scholars and scientists who were able to acquire high positions in the academic administration by cooperating with the Bolshevik regime. This information is important for the analysis of the survival strategies of prerevolutionary intellectuals in the 1920s and 1930s.

Finally, in the Russian History Institute of the Russian Academy of Sciences I investigated the archives of historians Aleksandr Evgenievich Presniakov and Boris Aleksandrovich Romanov who were Polievktov’s friends and close associates. Surprisingly, these collections did not contain any materials of Polievktov-Nikoladze family. However, the archives still proved to be useful since I found correspondence and unpublished articles that shed light on how historians’ work and living conditions changed during the 1920s, as well as how their conceptions of Russian history transformed in the aftermath of the 1917 Revolution.

The archival research conducted in Russia has both short-term and long-term benefits for my career development. First, I will use the materials obtained in the St. Petersburg archives to produce a publishable article on how Polievktov’s conceptualization of Russian history changed under the influence of revolutionary events during the period from 1905 to 1917. I will present this article at the international conference, which will take place in Rome in March, dedicated to a centennial reappraisal of the 1917 Revolution. This will be a perfect opportunity to get feedback from the leading scholars in the field and to build important connections with them. Second, the St. Petersburg archives provided me with a significant part of the evidence that I need to make further progress on writing the doctoral dissertation. At this point, I am looking forward to appling for additional funding to conduct research in Polievktov’s archive in the Central Archive of Georgia during the summer of 2016.

I would like to thank the Nanovic Institute of European Studies for their generosity in helping me realize this project and for contributing to my success as a doctoral student in the Department of History.