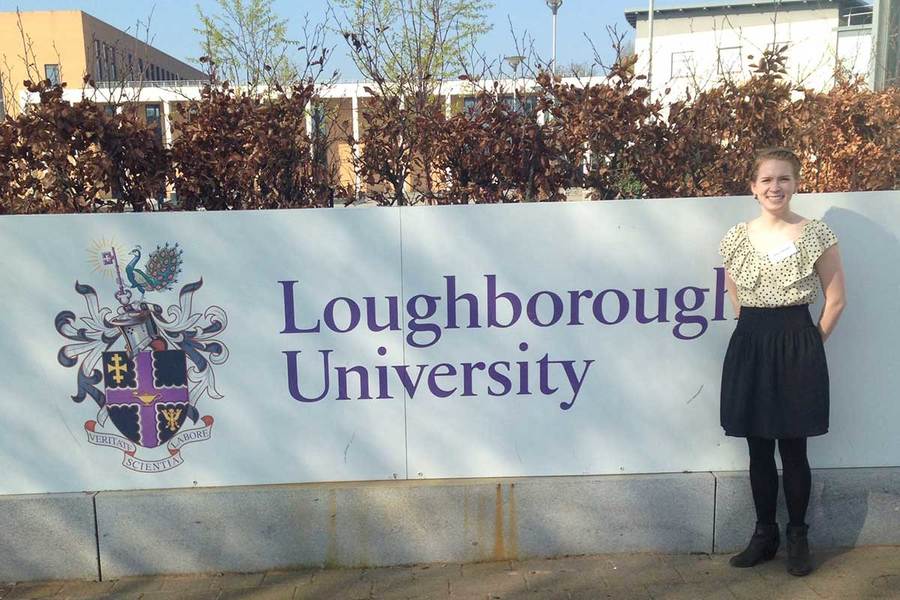 Stacy Sivinsky, a doctoral candidate in English, receive a Nanovic Institute's graduate professionalization grant to travel to England to attend a George Egerton conference at Loughborough University and interact with other New Woman scholars.

As a New Woman scholar, attending the George Egerton conference at Loughborough University provided me with a fantastic opportunity to discuss my research with established members of the field and receive valuable input about how to best develop my project. For the past several months, I have been working to analyze Egerton’s unique construction of an alternative model of time and illustrate how this temporal recreation allows for the dismantlement of constraining gender expectations. My presentation focused primarily on Keynotes, Egerton’s first short-story collection, and examined how her stories resist linear time as a means of promoting identity exploration and bodily freedom. The first portion of my argument focused on the ways Keynotes aligns female oppression with hegemonic timeframes while the second worked to demonstrate how Egerton promotes a version of time that collapses the past, present, and future into one “momental” experience as a means of opening up a space where agency can be actualized. Overall, the purpose of this research inquiry was to assert that Egerton’s re-imagination of time gives her characters a chance of temporarily escaping the boundaries of hegemonic structures or rearranging those line altogether and could prove relevant to 21st-century feminist discussions.

Conducting this type of analysis was especially rewarding since George Egerton is just now regaining popularity in literary and historical fields. Like many New Woman authors writing at the end of the 19th century, Egerton’s work received a great deal of praise at the time of publication but unfortunately was not the focus of scholarly examination until very recently; however, Egerton has regained a surprising degree of academic attention over the last several years with many critics focusing on her unique proto-modernist style and utilization of erotic themes in their analyses. Scholars from around the world are just now beginning to seriously investigate her writing through a variety of approaches, making my project extraordinarily timely. We are currently at a moment where interest in Egerton is growing but the body of scholarship surrounding her work remains relatively small, which means that there is still new ground to be covered and plenty of opportunity to enter the critical conversation.

Participating in the first conference dedicated solely to George Egerton allowed me to better understand the scholarly discussion surrounding her body of work and see how my project fits into this wider context. The event lasted for two days and was attended by a variety of scholars from different parts of the world who all presented the research they are currently conducting on Egerton’s texts. I received the opportunity to discuss my project on the first day of panels and delivered an 18-minute paper laying out the specifics of my argument before taking questions from the audience. The remainder of my time was spent listening to the other presentations, which covered a wide range of critical perspectives and literary approaches, and talking with other scholars about their work. Twenty-four New Woman scholars were in attendance, making it easy to have thorough conversations with established members of the field, including the keynote speaker, Margaret Stetz. These discussions illuminated the significant work that is being done on Egerton and helped reveal the importance of conducting research that seeks to reclaim New Woman authors whose works are at risk of becoming forgotten.

After presenting my paper and listening to other scholars discuss their research, I was struck by the new direction that analyses of George Egerton’s work and New Woman literature more generally are beginning to take. For the majority of the 20th century, Egerton and other fin de siècle women authors writing about feminist developments remained largely unexamined. At the risk of becoming forgotten, these writers could have easily fallen into obscurity if not for the recent upsurge in academic interest surrounding the New Woman movement. This conference not only demonstrated the growing enthusiasm for this particular field but also showcased the importance of research that works to reclaim these “lost” texts and assert their relevance to 21st- century society. Without projects like those presented at this conference, valuable works of 19th- century and early 20th-century women’s writing would continue to be left unstudied, which would be extremely unfortunate considering how relevant this body of work is to modern-day discussions about gender.

Getting the opportunity to attend the George Egerton conference thus allowed me to see how the field of New Woman studies is developing and receive some extremely useful comments on my research more specifically. Since my presentation occurred earlier in the conference, I was able to talk with a variety of scholars about my argument and now have a clear plan for expansion. Over the summer, I will most defiantly be turning back to my notes from this event as I work to turn my conference paper into a publishable-length project and continue to develop my ideas about Egerton’s utilization of alternative temporalities. Additionally, I was able to network with notable scholars involved in New Woman studies and make connections that I can utilize as my research grows. Overall, attending the George Egerton conference at Loughborough University proved to be a valuable experience that has made me even more passionate about studying New Woman authors, and I will look back on this experience as a defining moment in my academic career.