In Northern Ireland’s Post Conflict Era, relations between both the loyalist and republican communities and the Police Service of Northern Ireland (PSNI) have been complicated by historical grievances, remaining tensions, and the general challenges of the transition from war to peace. Sharia Smith (‘16), a double-major in Anthropology and Peace Studies, received a Senior Travel and Research Grant to travel to Belfast to study how these tensions are written upon the very walls of the city. She recently wrote to us about her experience: 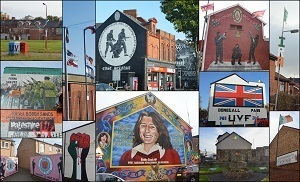 This research project aims to consider what murals and graffiti reveal about the culture of police and other “policing” bodies in post-conflict Belfast. Since the peace process and the 1999 Patten Report, what are the perceptions of police across the various neighborhoods of Belfast? What broader cultures of “policing” (most loosely defined as forms of social control) have evolved? And how do the expressions of these ideas manifest differently across social space? 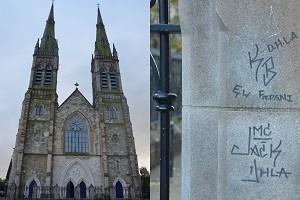 There has been a wealth of research done in the area of political murals in Northern Ireland and there is more research emerging now considering the changing role these murals play in the post conflict era specifically with the Re-Imaging Communities programme (Hill and White, 2012). Additionally there has been research done into the communities’ perceptions and confidence in PSNI and the problems with crime increases (Byrne and Jarman, 2011; Ellison et al., 2012; Pennington and Lynch, 2015); however, Northern Ireland’s police culture has not yet been studied through symbolic expressions in public space. 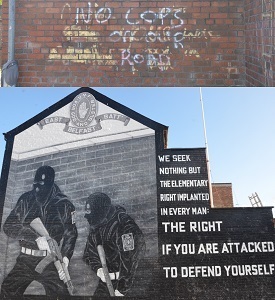 For five days, I walked the streets and neighborhoods of Belfast surveying and cataloging the murals and graffiti I found within the different areas of the city. I covered approximately fifteen miles a day in different sections of Belfast, effectively covering as much of the city as I could. Each community marks its area with various visual symbols of who they are and what they believe in, including but not limited to wall murals, paramilitary memorial plaques and gated gardens, flags of groups they belong to or countries they support, graffiti tags, painted curbs and light posts (Figure 1). Through the visual medium of graffiti and murals I found that there were expressions of negative perceptions of the PSNI in both the Catholic/Republican communities(Figure 2) and the Protestant/Loyalist communities(Figure 3). The walls, gates, electric boxes and practically every other surface were covered with some sort of symbolic or political discourse that provided insights into the perceptions of the members of the community. Based on the type of discourse, medium used, and location I was able to analyse whose perspective was being portrayed. Political and community groups opt for the more legitimized and less incitive murals; this is also due to the cost of using this medium. 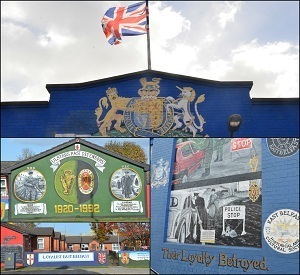 Figure 4, for instance, shows murals from East Belfast, a predominantly Protestant area. The murals explain their grievances over the disbandment of the Ulster Special Constabulary (USC) and the Ulster Defense Regiment (UDR) and their feelings of betrayal by these concessions to the Pan Nationalist Front. 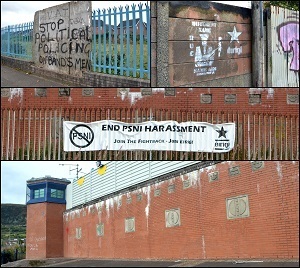 Figure 5, on the other hand, represents a collection of images from the Catholic neighborhood near the Springfield Road PSNI station. These are political expressions from a group called Éirígí meaning “Arise” in Irish. They claim that the Royal Ulster Constabulary was never disbanded as was agreed upon in the peace process but instead re-branded as the PSNI. The graffiti stencil can be seen on walls throughout the city of Belfast; the banner hangs on a fence less than 10 yards from the PSNI station walls. The bottom picture shows the defaced outer wall of the station. Paint bombs can be seen down the entire Catholic side, yet the Protestant side is a pristine surface. In the bottom corner of the photo you can just barely make out the cane that someone threw at the wall. This was among other objects like rocks, trash, and even a stray tennis racket; all had been hurled at the wall and left it’s mark. 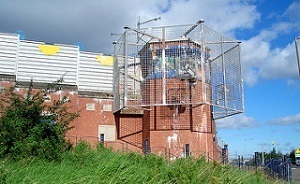 If you refer to Figure 5.1, however, you can see a sign of improvement. This was the same Springfield station in 2007. As you can see the cage around the watchtower has since been removed. There is no easy conclusion to be drawn from Belfast; it is a complicated city with a tumultuous past and an uncertain future. Figures 6 and 7, along with all the prior, show that public perception is not the most welcoming to the PSNI; however, in casual conversation people seem to tell a slightly different story. 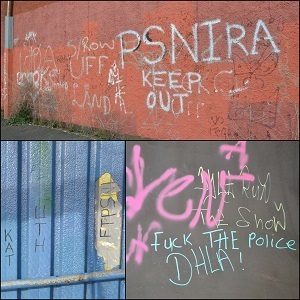 All agree that times have improved and the PSNI is without a doubt an improvement on what was happening during the Troubles, yet no one thinks they have it all right yet; there is always room for growth. Walking through those streets though, I could not help but think of the difficulties of policing in an unwelcome landscape. The alternative is a form of paramilitary community policing. Evidence of this is visible in the graffiti warnings found on houses, shops, and in alley ways. Figure 8 shows how these groups announce their territory and what they will not accept; if someone violates these standards they will be exposed to the community. Houses are covered with “Steven Mitchell Rapist” or “John Doe is a tout”-- a common insult found on houses throughout Belfast. Heroine dealers are warned to stay out of certain areas, and just in case you thought these were empty threats, scars like the explosion blast still remain as a reminder that violence is not so far away. This form of community “policing” through paramilitary groups such as the UDA, VTOT, or the ONH for republican areas, is seen as a way to keep the “lunatics” in line. This was common practice during the Troubles at the height of many of these groups' power. 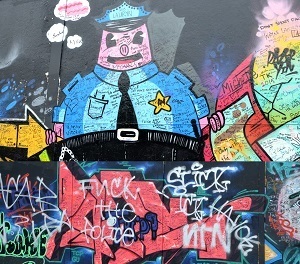 Based on these findings we gain insights into the continuing tensions between communities in Belfast, the challenge that youth crime and perception pose for PSNI officers, and the need for improvement within community relations with both the loyalist and republican communities, for different reasons. Each side has its own grievances which need to be addressed in different ways in order to continue down the path of peace.

This research has allowed me to travel abroad for the first time, conducting research on my own in a completely different cultural context, and has allowed for great personal and academic growth. Introducing different research perspectives provided me with a robust research topic which I may expand into a dissertation in the future. 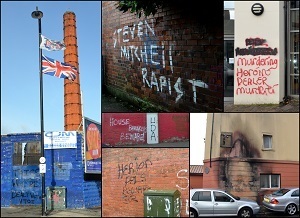 Ellison, G., N. W. Pino, and P. Shirlow. "Assessing the Determinants of Public Confidence in the Police: A Case Study of a Post-conflict Community in Northern Ireland." Criminology and Criminal Justice 13.5 (2012): 552-76.