Welcome, Shannon Bugos, to our Student Spotlight! Shannon ('16) is a double-major in English and Peace Studies who received a Summer Travel and Research Grant to conduct interviews and archival research in Ireland. Her research sought to combine her two majors by analyzing the the extent to which the Field Day Theatre in Derry achieved its goal of creating a space outside of conflict in which Ireland's opposing forces could be put in conversation and negotiation with one another. She recently wrote to us about her experience:

Sectarian violence exploded in Northern Ireland in 1968. For the next three decades, shootings, bombings, and kidnappings drove society into a time of fear, suspicion, and revenge. In the midst of this conflict, the Field Day Theatre emerged. Founded in Derry in 1980 by playwright Brian Friel and actor Stephen Rea, this traveling theatre company dedicated itself to producing and performing dramatic literature that commented on the divided Irish society.

These founders pursued what an earlier Irish publication termed “the fifth province” – an imagined place formed out of a belief in the lost secret center of Ireland where prejudices fell away and harmony thrived. The ultimate goal of the founders of Field Day was to encourage those involved in “the Troubles” to forge a new sense of cultural identity for Ireland through the creation of a space in which Protestants and Catholics could imagine and build a peaceful existence free of past prejudicial and violent realities.

My research examined the extent to which the Field Day Theatre succeeded or failed in the pursuit of their goal. Through archival research and more than a dozen interviews with well-placed theatre and peace academics, I sought to understand how two incompatible world-views, translated into political goals, could be put in conversation with one another in order to work to establish a single reality of peaceful coexistence.

The concise conclusion of my research question is that there exists no simple “yes” or “no” answer. In regard to the Field Day Theatre, I uncovered a creative ambiguity in that the creative arts, such as theatre, attempt not to present solutions to conflict but rather to recast and to rephrase the question so as to invite multiple interpretations by the opposed parties into a conversation for which the daily social and political order has no space. 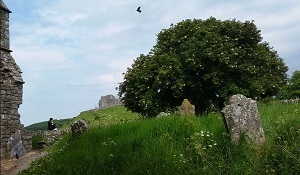 I know that when the Field Day Theatre Company emerged in 1980, Friel and Rea discussed how they did not have immediate plans for continuing the work of their company. The premiere Field Day play Translations underscored the deeply rooted opposition between Catholics and Protestants, Irish and English, nationalist and loyalist in the north of Ireland. Though hopeful, Friel and Rea were by no means certain if those entrenched in the conflict would be open to using literature as a way to highlight injustices on all sides and to negotiate a peaceful path forward. If the reception of Translations confirmed their hopes, Friel and Rea said they would continue to work for cross-community understanding and discussion through Field Day. As it turned out, Translations garnered much attention, even internationally in places such as South Africa and Thailand, and the Field Day Theatre officially maintained production until 1998, the year of the Good Friday peace agreement.[1] Over the course of its theatrical run, Field Day did not attempt to determine who was right and who was wrong in the conflict. Rather, the plays were meant to highlight the pains suffered by all communities, to give voice to those trapped in a violent society, and to imagine and ultimately construct a peaceful future – all through the power of storytelling.

During our interview, Seamus Deane, the main philosophical voice on the Field Day board of directors, discussed the importance of “the story” in Irish culture. Stories, specifically ghost stories in his case, were the main line of communication between his “antiquated” parents and his “modern” self. This paralleled what was happening among groups in Ireland:

Those ghost stories [told by my mother] were in fact political analyses of where we were and how those people of the earlier generations had lived and how they had understood their experience…. It was a world within another dimension, and to be modern you had to give up that dimension, or any dimension other than the secular. It really dawned on me halfway through my connection with Field Day that to tell a ghost story is very often to tell a story about a wrong that has never been righted…A ghost story cannot end until the ghost stops coming back, and it is like saying that the past will keep on coming back because there is too much injustice in this system for the system to endure or for people to endure or put up with it, even if it means dying.

What this means, then, is that Field Day proved successful in opening a fifth province between the opposed communities in Northern Ireland by the very fact that it told stories that drew in Catholics as well as Protestants, nationalists and unionists. The presentation of a story on a public stage gave light not only to past injustices suffered by each community but also to a way forward through the presentation itself. Field Day intentionally thrust the troubled past of the island onstage so as to encourage people to see, to understand, to react, and, most importantly, to work together for an end to the violence and for a peaceful future. 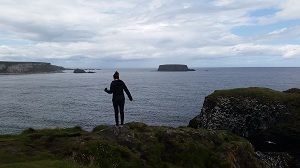 Through its end after the Belfast Agreement, the Field Day Theatre demonstrates its success: peace has made the theatre obsolete. On the other hand, the theatre was only partly successful because inequalities continue in housing, education, as well as voting rights and intergroup tensions still abound, particularly during the summertime marching season. Whether full peace will come to Northern Ireland, I have learned, remains very much open for debate – a debate founded on the works of the Field Day Theatre that set the idea of creative ambiguity in the context of conflict transformation.

My experience this summer was both inspiring and frustrating as I attempted to intertwine my literature and peace studies majors in my project. Interviews with prominent academics such as Declan Kiberd and governmental peace workers like Tim O’Connor proved extremely helpful in determining my future academic and career goals. Essentially, I have learned that I would like to focus on human rights in a society entrenched in conflict. In order to achieve these goals, I will write – write on how my experiences like this summer have taught me to be open to ambiguity; to engage with those who live with fear and conflict every day; to try to understand conflict through a lens shaped by the past, present, and future; and to work towards making a society better but knowing that my effect is limited, that in the end peace comes from those who have experienced violence at its worst yet can still imagine a peaceful future.

[1] Some observers claim that the 1990 departure of Friel from the company marked the theatre’s end.