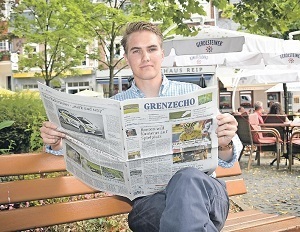 Sometimes research requires sweat and perseverence. This was certainly Scott Copeland's experience. Scott ('16) is a Sociology major who received a Summer Travel and Research Grant to conduct research on European identity within the German-speaking community of Belgium. He recently wrote to us about his experience:

This summer, I spent six weeks in Belgium’s German-speaking community in order to study this linguistically-distinct minority and understand how their complex history and deep international ties affects their European identity. It was a challenging experience not without setbacks and frustrations, but in the end I was able to grow as a person, as a student, and as a researcher.

With a population of only 75,000, this community comprises less than 1% of the total population of Belgium; yet, it has its own parliament, representation in the federal Belgian government, and representation in the European Union. Its close proximity to the Netherlands and Luxembourg means that the area has a high level of mobility with thousands of inhabitants crossing international borders every day in order to work. Moreover, the linguistic minority status within Belgium means that the German-speakers must learn French, and very often Flemish, in order to fully take part in national politics and to converse with other Belgians. As a result of these factors, this community provided the perfect opportunity for me to study the impact of cross-border mobility, multilingualism, and heavy contact with other Europeans on European identity.

I hypothesized that if one were to travel over an international border every day, then he or she would develop a stronger European identity than one who both lived and worked in the same country. With regards to defining “European identity”, I considered support for European governance structures and/or a feeling of solidarity with other Europeans indicators of a strong European identity. This dynamic definition allowed me to capture different aspects of European identity, and I saw features of both sides during my research.

At the outset, my methodology consisted of surveys and focus group sessions. Both the survey and the focus groups would be centered on European identity and the impact that international contact has on such an identity. While I was able to administer the surveys, the focus groups were not quite as successful. I realized that it is very difficult to organize a meeting with several complete strangers at a pre-arranged location without using a serious incentive. Thus, I was forced to alter my methodology and conduct one-on-one interviews as well as a few larger conversations in order to interact with a larger sample of the population.

In order to administer the surveys, I stood in the busy market section of Eupen and asked people who were walking past to fill out the survey. Although this method does not yield a perfectly representative sample, it allowed me to reach a broad section of the population without imparting my own biases on the sample. This was by far the most stressful and time-consuming part of my research. For example, with a very good response rate of 30%, one would have to approach more than 150 people in order to get just 50 responses. I spent many hot hours standing under the sun asking whoever walked by to fill out my survey.

The most exciting part of my research involved interviewing members of the community. My main goal was to analyze their attitudes towards and feelings about Europe – everything from opinions about other Europeans to the expansion of governance powers at the European level. The interviews allowed me to have deep conversations about the intricacies of the attitudes of the community. I learned that history plays an important role in determining the identity of the region, and I was much better able to understand the mindset of this interesting group of people.

This research experience was truly amazing. It proved to be highly formative and productive, while also allowing me to experience a part of the world that I had never seen before. I hope to eventually pursue a PhD in either Sociology or Political Science, and this research project provided me with invaluable experience that will prove absolutely vital in my future endeavors. Moreover, I made great friendships and contacts with people who hold a variety of positions throughout the region. If I ever again want to do work in the German-speaking community, I know that I have people who can act as resources and assist with anything that I may need. I am truly grateful that I was granted this opportunity, and I hope to continue working with European themes and issues in the future.