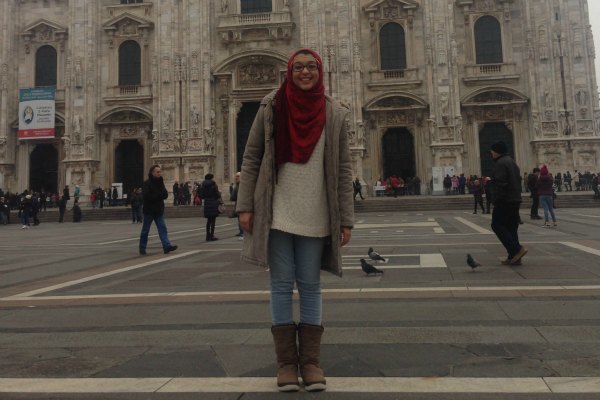 When Sara Abdel-Rahim ('17), a double-major in Political Science and Arabic, received a Break Travel and Research Grant for Sophomores and Juniors to travel to Italy over winter break, she hoped to gain an understanding of immigration in Italy. During the course of her research, she also gained perspective, emotional as well as intellectual understanding, and a solidified professional vocation. Sara recently wrote to us about her experience:

“I was transported at 2 o’ clock in the morning with 300 other immigrants in the back of a large semi truck. I felt like cattle. We got to the dock of Libya, and boarded a makeshift fishing boat. This boat was made for fish, not for transporting people through the hungry waters of the Mediterranean. A boat that allows for 50 people, fit 300 that night to maximize profits for smugglers. I left my life in the hands of God and this fishing boat that no man, woman, or child should have to endure for that period of time. 4 days later without food I would make it to the shores of Italy, without an ounce of energy in me, and hope for my future.” This testimony was one of many that I received during my research in Sant’Angelo, Italy.

The research question that I tried to answer during my time in Italy was how Egyptian immigrants in the town of Sant’ Angelo create informal structures to help others from their town immigrate. The second part of my research attempts to understand how these Egyptian immigrants integrate into Italian society. Over the past three decades there has been a rise of immigrants from North Africa into Europe, especially into Italy as their first access point in the continent. Building off of this fact, I sought to gain a better understanding using immigrant testimonies about reasons for leaving their country, mode of transportation, and the process of their integration into Italian society. This research is not only relevant due to the large influx of refugees in Europe, but also due to the rising tension among Europeans towards immigrants, and its correlation to xenophobia and Islamophobia in the region.

Egyptian immigrants were among the first to settle in Italy. Egyptian emigration to Italy followed the male migration model, in which the male breadwinner migrates to the host country, and is later followed by his family. The network of assistance created by the Egyptian community was crucial in helping recruit family and friends to the country. Over two-thirds of documented Egyptians had information regarding Italy prior to their arrival in the country. The case study of Egyptian immigrants in Italy is important, because migration is not always related to economics. Politics play an essential role as well. I hypothesize that current Egyptian immigrants are not only migrating to other countries like Italy for economic reasons, but for political reasons as well. These political reasons stem from the recent military coup that overthrew the Muslim Brotherhood in Egypt.

My experience in Italy was nothing short of life changing. My father is an Egyptian immigrant and I grew up hearing up about his journey to America. The stories that I heard during my research project I could not wrap my mind around. To be honest, I could not even believe them, they were so out of my frame of thinking and understanding. These stories were so personal, riveting, and heroic that I believe everyone has the right to learn about these men and their journeys. My research was conducted in the main town of Sant’Angelo. This is a small town outside of Milan. Everyday I would interview 2-3 men that emigrated from Egypt to Italy. Before I began interviewing the immigrants, I expected their stories to be very different. However, I was appalled that every one of them came to Italy using sailboats from ports either in Libya or Egypt. They all endured a stressful journey at sea not knowing whether or not they would survive. While some were fortunate enough to travel for only 24 hours, others endured the journey of up to 72 hours at sea until they reached the shores of Italy. All of the stories contained a mention of a smuggler that was paid over 10,000 Egyptian Pounds per individual to transport them from the shores of Egypt or Libya to Italy. Many of the immigrants upon arrival would claim they were Palestinian, Iraqi, or Syrian. This was a strategy that all immigrants from Egypt learned, before getting to Italy, because Italian authorities would send them back home if they were from countries not in political turmoil, like Iraq, Palestine, and Syria.   I found an interesting connection among all of the immigrants that I interviewed, which was their home city in Egypt. They are all from Mansoura, a small rural town in the north of Egypt, that has one of the highest rates of youth leaving Egypt to live in other countries in Europe. My original questions looked at the informal structures created by immigrants to help other immigrants better integrate into Italian society. The way that these immigrants help each other once they arrive in Italy is by creating an isolated Egyptian community. Many of them do not really speak Italian, they do not have Italian friends, and they only have social gatherings with other Egyptians. I sensed the dire need to preserve the Egyptian culture among all of the immigrants that I interviewed, hence the choice to not integrate into Italian society was necessary. Interesting enough, those who immigrated to Italy after the Egyptian revolution in 2011 based their decision not only on economic factors, but also political factors. All of them were avid supporters of the Muslim Brotherhood in Egypt, and after Mohammed Morsi was ousted, they realized they could not live in a country that has such open hatred towards the Muslim Brotherhood. This trend is interesting because many immigrants prior to the revolution left Egypt because of economic reasons, yet adding a political dimension to reasons for emigrating is a new occurrence.

During my time in Italy I noticed a bit of sentiment towards immigrants, especially towards Muslim women who are more noticeable because of their religious dress. I am a Muslim woman who wears the headscarf; therefore I experienced some of this sentiment first hand. After the Paris attacks those sentiments were heightened towards many members of the immigrant community. However, listening to the stories of these immigrants only challenges existing stereotypes, and combats Islamophobia further. These individuals left their country where everything was familiar to them in order to achieve a better life for themselves and their families. While given the opportunity to interview thirty individuals, I believe that their stories are similar to thousands of other immigrants and refugees. Understanding their stories first hand is significant to the existing rhetoric regarding immigrants and refugees in Europe. It shows that they are not radical or want to create violence in their respective communities. Another significance of this research is the trends that were found. It is evident that in recent years immigrants from Egypt have left their country in order to escape political persecution from the current regime. This opens a new door in scholarship regarding immigration studies because projected numbers for immigrants into Europe is dependent on political environments in the Middle East.

I revere my father and all of the immigrants I interviewed for taking the risk to unknown lands where they did not have family, friends, or even a similar language to fall back on. These immigrants were willing to risk their lives without food and water for days, wrestling the waters of the Mediterranean Sea in a small fishing boat to seek a better future. This experience contributed to my academic development because it has made me more aware of political situations in the Middle East. It has provided me with a foundation of understanding the migration crisis into Europe from a first hand perspective. Furthermore, this experience solidified my desire to become an immigration lawyer. These individuals deserve to have a legal voice in their societies regardless of whether or not they are documented citizens. Even though this project was specific to an area in Italy and to a group of Egyptians immigrants, I believe that these stories are representative of immigrants around the world and their desire for a better life.