Who wants to go to Siberia for the summer? Roman Gusdorf did! Roman ('17) is a double-major in Science-Business and Russian who received The Pushkin Grant for Advanced Language Training in Russian. With it, he received individual lessons in Russian at the Eurasian Linguistic Institute in Irkutsk, and in his spare time he volunteered in a biology research lab at Irkutsk State University. Roman recently wrote to us about his Siberian adventure:

I had the privilege to spend this past summer in Irkutsk, one of the largest cities in Siberia, located about an hour’s drive away from the most biodiverse and largest freshwater lake in the world, Lake Baikal. It was an extremely productive summer, and I was able to pursue my three main passions all in one place: science, Russian, and nature. Before stepping off the plane in Irkutsk in June, I underestimated just how wonderful this experience would ultimately be. 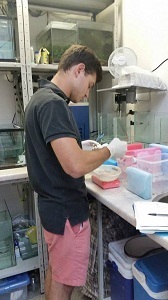 I was very fortunate to be able to volunteer in a research lab in the Biology Department of Irkutsk State University. This was my first experience where I was able to use my knowledge of Russian in a practical setting. I conducted experiments on the thermotolerance of the amphipod species Eulimnogammarus Cyaneus, which is endemic to Lake Baikal. The experience culminated in a presentation I gave in Russian to the department on the results of my experiments. My results will eventually be published in a scientific journal in English. Working in the Russian lab gave me a unique perspective on how research is carried out internationally.

For the first time, I received individual lessons in Russian, which were therefore more tailored to the areas I was most interested in improving: my conversational skills and my vocabulary. At the Eurasian Linguistic University I took 20 hours of classes a week, Monday through Thursday, leaving me with Friday free to work in the lab or to go on an adventure. My listening comprehension and speaking skills improved dramatically.

In addition to classes and research, I was able spend some time with nature as well. During the summer, despite the stereotypes of Siberia being a frozen tundra, the city of Irkutsk is actually just as hot and humid as my hometown of St. Louis (of course the locals still filled me in on plenty of “horror stories” of the weather during the winter). The oppressive heat was in spite of the large amount of poplar tree seeds on the ground which made it appear as though the sidewalks were covered in snow. I traveled to Lake Baikal on multiple occasions, and was able to hike in what seemed like a jungle on nearby mountains, which were teeming with vibrant growth and offered unbelievable views of Lake Baikal. While collecting amphipods for research, I had the good fortune of riding on a ship up to Bolshie Koty, an extremely small village on the coast of Lake Baikal. The smaller city of Irkutsk and this nearby small rural village offered me a true glimpse into Russia and all of its mystery. 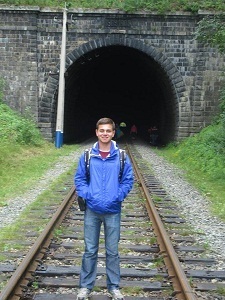 In addition to the experiences of the lab, nature, and Russian lessons, I also had the privilege to try some more Russian food. Of course I had the stereotypical borscht, olivier salad, pirozhki (pies), and my favorite: pelmeni (a dish that was actually created in Siberia!). Mongolia’s close proximity allowed me to try some completely new foods as well. My favorite was called Pozy, which is essentially a large pelmen with broth inside the dough. Also I often ate Omul, a fish related to salmon that is a local delicacy only found in Lake Baikal. Needless to say, it was delicious.Before this Siberian adventure, I had only really been able to see Moscow and St. Petersburg, the political and cultural cities of Russia respectively. Moscow and St. Petersburg were very Europeanized and relatively advanced. The city of Irkutsk was much more conservative in design and atmosphere, retaining a much more Soviet character. Despite the less modern feel, Irkutsk was the only city where I have been able to safely drink the tap water in Russia. The 6 hour flight ride from Moscow to Irkutsk helped me to fully realize the vastness of Russia (and the implications this has had on its history and politics), in a much more significant way than I had understood from looking at a map. In addition, the flight helped me to more fully appreciate the grandness of the Trans-Siberian Railroad which I got the pleasure of riding along. 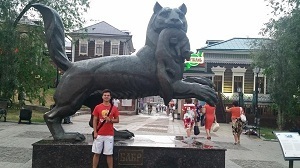 All in all, this was an invaluable trip for my future, giving me priceless lessons about the Russian language, Russian culture, and the scientific method, as well as giving me a chance to explore one of the most beautiful places on Earth. There is no doubt I will miss Irkutsk, and as they say, “Чем дальше от глаз, тем ближе к сердцу”.