Graduate students aren't the only Notre Dame students to present at conferences!  The Nanovic Institute recently sent undergraduate Paul Luczak ('15) to the British Conference of Undergraduate Research at the University of Nottingham to present a paper titled "Academies and England’s Changing School System."  Paul recently wrote about his experience: 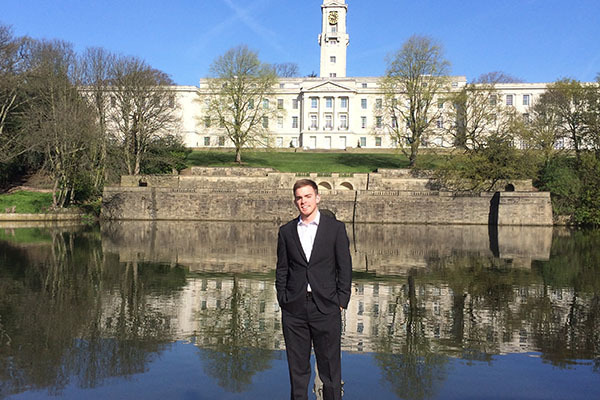 On April 14th and 15th, through the generosity of the Nanovic Institute, I attended and presented at the British Conference of Undergraduate Research at the University of Nottingham. This conference brought together a global mix of undergraduate students researching a variety of topics and subjects. In my short time at the conference, I discussed with a Latvian student the sentiment of fellow citizens following the Russians' activity in Ukraine, learned that British pastries have a distinct heritage in Central America, and listened to a presentation on the role of the media in British politics. However, the central purpose of traveling to Nottingham was to present my research: Academies and England’s Changing School System.

Academy refers to a category of schools that operate autonomously of the local authority, or what we would call a district. These schools are all-ability, meaning they accept all students, and receive funding directly from the Department for Education. All academies are granted the freedom to deviate from the national curriculum, change term lengths, and set pay and condition for staff.

Within the portfolio of academy schools, there are two types of schools that still retain the academy label. These are sponsored academies, and converter academies. It’s important to note that in reality, the titles ‘sponsored’ and ‘converter’ are descriptions of the schools, rather than their formal name. In practice, they are known simply as ‘academies.’ Sponsored academies are managed and led by a sponsoring organization. These sponsors include successful schools, businesses, universities, charities, and faith groups. Maintained schools typically become sponsored academies in hopes of turning around a failing school. Therefore, when a school becomes a sponsored academy, the goal of the sponsor is to change the culture, identity, and performance of the school in order to become classified as ‘good’ or ‘outstanding.’ Converter academies, on the other hand, are academies that were schools already deemed good or outstanding by the Department for Education. Because they have a history of success, the DFE is willing to grant these schools the freedom to operate autonomously of the local authority. Given the already high levels of achievement, little change occurs when a maintained school becomes a converter academy outside of alterations to the source of their funding and their association to the local authority.  At the start of the 2012-2013 school year, 2,442 schools were converter academies, and 858 were sponsored academies.

Sponsored and converter academies refer to very different types of schools, but unfortunately, they both possess the same title: an academy. My research studies how the government and sponsoring organizations define ‘sponsored academy,’ and whether parents and community members understand the overhaul inherent in a transformation to a sponsored academy. I found that parents understand and can define the type of school their child attends, but system level confusion persists.

Given this system level confusion, I feel an obligation to share my research in hopes of raising awareness of these schools. This is exactly what I was able to accomplish at the University of Nottingham. At the conference, I presented to many interested and involved members of the education community, but two conversations stood out. One was with a male student, about the same age as me, who prefaced our conversation by stating, “In my town a handful of academy schools have popped up recently. I’m interested in hearing more about these schools.” Another was with an older woman, who introduced herself as a school governor (similar to a school board member) at a school considering a conversion to academy status, but admitted to not possessing a true understanding of these types of schools. In both situations, I hope my presentation stimulated understanding, and helped illuminate the meaning of this hidden school reform.

By attending the British Conference for Undergraduate Research, I was able to share my research on academy schools, and hopefully help British citizens better understand the schools that are now becoming common place in their towns and villages. My experience in Nottingham only enhanced my motivation to continue to study these schools, and ensure that English parents possess a complete understanding of the school their children attend. Thank you to the Nanovic Institute for making this dream a reality.