Olivia Bratton ('16) has expressed so much of what the Nanovic Institute is all about: "I would like to thank the Nanovic Insitute for European Studies for this opportunity to work, study, and live not just in the context of my ideas about places, cultures, and traditions, but in the places, cultures, and traditions themselves." Olivia, a Medieval Studies major and an Art History minor, received a Summer Travel and Research Grant to travel to Italy and Spain to pursue various avenues of artistic research and practice. And what an experience she had! Here's what she had to say about it:

I received a grant from the Nanovic Institute for European studies to research sacred art in Florence, Italy and the North of Spain for the summer of 2015. My project included an apprenticeship with Osuma Marigazo in Florence and photographic research along the Camino de Santiago in Spain.  The entirety of the project was far more difficult than I anticipated, but in wonderfully challenging ways.  Beyond the art and art history skills I acquired, I earned new, invaluable understandings of flexibility, endurance, and appreciation of foreign cultures. 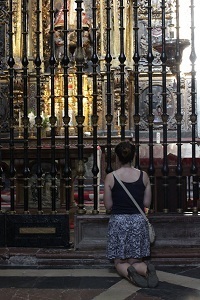 In Florence, my original apprenticeship was cancelled the day after my arrival.  Thus began the lessons in flexibility and endurance.  Within two days, I had another apprenticeship lined up with more individual attention and the ability to focus my project more directly.  Ultimately this turned out to be a very good thing, as I was able to work on depictions of the Stations of the Cross, the theme of my senior project.  For three weeks, I was able to explore the historic art that is pouring out of every nook and cranny in Florence.  This immersion in the Italian traditions of sacred art vitally informed the work I created while in Florence. I was also able to travel to Assisi to explore the frescos of this incredible center of art history and spirituality.  This was one of the prime examples of the locational difference.  I have studied Brunelleschi’s architectural proportions and have sorted through hundreds of photographs and books of frescos and considered the iconographic plan of dozens of Italian churches, yet many of these abstract studies offered only a distorted view of the objects.  Frescos never made sense, never seemed visually appealing much less liturgically appropriate until I entered the Catherdral in Assisi.  Renaissance proportions never sat well with my experience of sacred spaces until I actually entered them and could experience the movement of space and order of design inclining one to the sacred for myself.

This process of osmosis contributed directly to my work with Osuma. I had expected when securing an apprenticeship in Italy that I would be exposed to several new techniques of creating art, but I hadn’t anticipated having to entirely re-learn how to conceptualize object, images, and visualization.  My art background, I discovered, was entirely photography informed.  With Osuma, I had to unlearn 21 years of flattening the 3D object into a 2D image, and re-learn (or learn for the first time) sculpting a 3D image out of a 2D object.  This was an entirely different way of understanding the relationship between a physical thing and its depiction.  Without the immersion in Florentine art, the capital of this process, I could not have grasped this new method in a mere three weeks.  This conception, however, provided the direct foundation for the next stage of my work.

As I finally began to disassociate from the photographic process of drawing, I set out on my photographic journey across Northern Spain.  The irony of this progression was not lost on me, but I found that this new skill set actually provided my photography with new techniques as well.  Not only was I able to work on the documentation projects I had outlined, I found myself beginning to explore experiences in new ways through the lens.  I began playing with angles and framing in new ways that brought me full circle to my original intent in conducting photographic research. I was successfully able to begin immersing myself in a process of ethnographic photography.  Rather than study a locational culture, I primarily studied the culture of pilgrims whom I met and with whom I interacted along the way.  Using this material I have produced a body of work organized into two separate photographic series for which I am currently seeking publication.  Secondly, the invaluable experience of physically participating in these sacred sites, both in the art of Florence, and on the Camino de Santiago has vitally informed my senior project dealing with virtual pilgrimage.  Thirdly, I have just entered into discussion with Dr. Ball in the anthropology department regarding the codifying of photography as a self-sustaining research tool.  All of these results of my research are in their infancy stage, but precisely that towards which I was working. 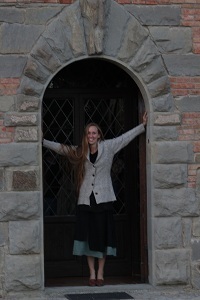 I was surprised by several unexpected difficulties of my experiences this summer.  As noted, the drastic difference of methodology discovered in Florence pushed me to re-conceptualize my understanding of art.  Similarly the struggles encountered on the Camino de Santiago forced me to rethink many of my assumptions about pilgrimage and how the physical and the virtual and the spiritual are connected.  In my conceptual plan, I did not account for the physical exhaustion that accompanies such a long, physical exertion.  My experience of the Camino was far less spiritual than I anticipated due to the fact that after walking 25 miles in one day, nothing but a meal and a bed really seem to matter anymore.  This reality of physical pilgrimage has highly affected my understanding of spiritual and virtual pilgrimage experienced through liturgies such as Station of the Cross.  It has become a vital element of my senior project in that the aspect of exhaustion is being included in the consideration of human form.

Only by the generosity of the Nanovic Institute for European studies was I able to experience the physical reality of my ideas.  The research I completed not only granted me data, but much more importantly an understanding of the oh-so-easy idealizing of a situation.  It challenged me to understand different education systems, work through unexpected setbacks, and consider my ideas in the context of reality, outside the ivory tower and on the sweltering flagstone streets of Florence and the drizzling mountain paths of Northern Spain.  I would like to thank the Nanovic Institute for European Studies for this opportunity to work, study, and live not just in the context of my ideas about places, cultures, and traditions, but in the places, cultures, and traditions themselves.