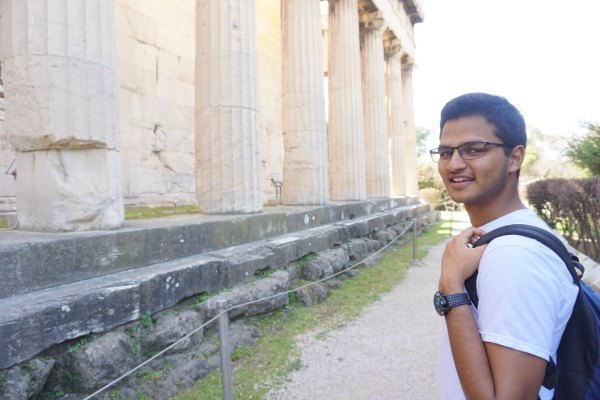 In the last seven years Greece has garnered impressive negative international media attention on account of its prominent role in the making of the Eurozone Crisis. While a vast majority of existing literature focuses on the raw numbers, Nikhil Garg ('18) contests that studying the Crisis through the lens of Greece’s cultural and historical trajectories allows us to better understand not only the formulation of the Crisis, but also the very future of the European Union. The Nanovic Institute awarded him a Break Travel and Research Grant for Sophomores and Juniors to travel to Greece to test his contention. Nikhil recently wrote to us about his research:

Plagued by war, genocide, oppression, and foreign-led regime change and recovery, Europe wishes to remotely distance itself from the tumultuousness of its 20th century. The signing of the Maastricht Treaty in 1992 and the subsequent creation of the Eurozone helped to build a single market that was intended to foster positive peace through economic cooperation and joint stability rather than simply negative peace, or the absence of war. Though the European project has been largely successful in preventing material war, the last seven years have introduced a more sinister conflict in the clash of cultures and ideologies between the 19 Eurozone members and certainly between the central and peripheral member states. While most economists point to the unfavorable economic conditions of the peripheral European states when compared to the central ones, my experience in Spain during the fall of 2015 led me to further question the historical causes of the Crisis. For that reason, I travelled to Greece in the spring of 2016 to study how Greece’s history contributed to its current position in the Crisis and whether we can develop similar narratives to not only explain why the Eurozone Crisis happened, but to also predict what will happen to the economic and monetary union in the future. This latter point is particularly important in light of the growing fears of “Brexit” and looming banking crisis in Italy.

Through a variety of on-site interviews with professors, politicians, think-tank members, and ordinary citizens, I was able to get a better understanding of Greece’s historical composition and prevailing attitudes of the Crisis. To this day, a vast majority of citizens remain opposed to the harsh austerity measures set forth by the “Institutions” (the Troika and other central countries, namely Germany) while most Greek intellectuals not employed by the state admit that memorandum was necessary to curtail rampant irresponsible public spending. In the mid-19th century political parties exploited cronyism and deep-rooted religious, family, and village-based ties in agricultural communities to create powerful parties that dominated the government for numerous decades. Following the intermittent interruptions of the 20th century and the collapse of the Papodopolous regime in 1974, two new parties emerged utilizing the previously successful policy of patronage to pick off votes from the larger population. As a result, PASOK and New Democracy dominated the political arena of Greece until very recently, when the Crisis opened up the political market to fringe groups like Syriza, the near-fascist Golden Dawn, and several others.

What is important to note here is that the economic crisis was preceded by a political crisis in which two dominant parties bred widespread mistrust in the government. By forming “strategic alliances” with large voter groups like farmers through exclusive tax breaks, public works promises, and job guarantees in the government, the two parties pitted the various groups against one another and, more notably, against the government as a whole. Such rampant mistrust was manifest in tax evasion, abuse of the welfare system, and continued unequal contribution to the social security and pension systems. While bloating the public sector to secure short term political gains is far from a novel tactic, Greece’s timely admission to the Eurozone gave it immediate access to essentially infinite cheap credit, which extended the timeline of the “Keynes-gone-wild” policy by more than a decade. Only when the housing bubble burst and the resulting doom loop of the credit crunch rapidly emptied Greece’s public coffers was the issue finally uncovered.

So no… the Greeks aren’t fundamentally lazy and corrupt people. In fact, Greece remains the only country in the Eurozone to present a legitimate, democratic response to the Crisis. While other states immediately caved under the pressure of memorandum and austerity (Cyprus, Ireland, Spain, etc.), Greeks elected Syriza and explored alternatives through which they would not be subjugated yet again by the pseudo-foreign occupation of the Troika and Germany. Greece actively refused to play second fiddle to the institutions because it believed in a democratic alternative through Syriza, which I contend would have been successful in its initiatives to curtail overaggressive public spending and patronage to return Greece to a more responsible fiscal state. The German banks’ substantial exposure to Greek sovereign debt lends credibility to the country’s staunch opposition to any reformation policies without austerity, which was a fail proof way to force financial responsibility. Their insistence on memorandum, however, nearly pushed Greece out of the Eurozone, which suggests the need for intense reformation of the European project.

There is serious discussion of an impending end to the Eurozone and European Union. I, however, believe that the Crisis was simply a tempest in a teacup when compared to the greater macroeconomic trends emerging around the world. For European nations to remain competitive in a global economy in which the United States, China, India, Russia, and parts of Latin America continue to dominate, they must remain together. The Crisis brought to light fundamental delusions of the Eurozone but ever a master of brinksmanship, Brussels now knows about the major fissures within the economic and monetary union and can propose radical solutions that were previously inconceivable. From countercyclical stabilization funds to pan-European welfare programs to even pan-European taxation mechanisms, the Crisis has paved the way not for disintegration, but rather greater consolidation that, one day, might conceivably lead to a fiscal union in which the economics is at the forefront of the currently economic and monetary union. Regardless, if the European project is meant to continue, the leaders must take into account each nation’s history and culture as they fundamentally inform how a country behaves from a political and economic standpoint.

With the referendum on Britain’s continued membership of the European Union just a few months away, the identity concerns of the Eurozone and European project are vitally important. While a populist response to financial disarray is not uncommon and, in fact, successful, I hope the European community remembers the purpose of the Maastricht treaty and uses the Crisis as an opportunity to recalibrate itself and forge ahead in an ever closer union. I hope to continue my research on the Eurozone Crisis and transition to projecting what might happen or what should happen to best serve the needs of the European community. I am extremely thankful to the Nanovic Institute for European Studies and Professor Joseph Buttigieg for making this research project a possibility. I hope to write an article for publication and/or a senior thesis regarding this topic, and I have amassed a great deal of information with which I can do so.