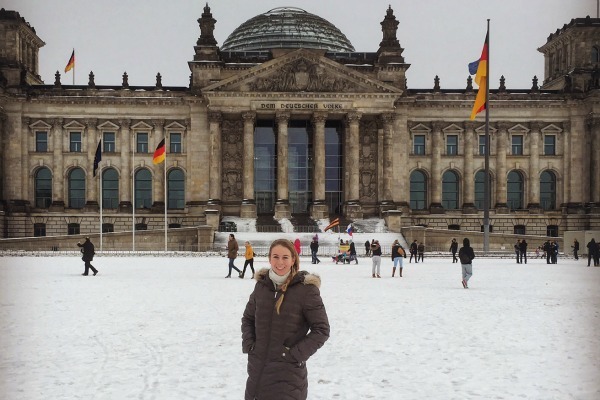 There are many differences between German and American universities, yet both educational systems have the potential to learn and benefit greatly from each another. Monika Spalinski (’16), a double-major in Spanish and German, received a Senior Travel and Research Grant to explore this topic further through her research in Germany. Monika recently wrote to us about her experience:

There are many differences between the German and American higher education systems, with each system having its own distinctive advantages and disadvantages. In recent years German higher education has been transformed by the introduction of the Bologna reforms in Germany, reforms that aim to better standardize higher education and provide internationally accepted degrees. How have these reforms affected career preparation and career transitions for German students? How have they affected the dynamics of the German classrooms, and have they made the experience of a German university student more or less similar to the experience of an American university student?

As a senior at the University of Notre Dame with a minor in European Studies, I am preparing to write my senior capstone essay for the minor next semester with a focus on the differences between the German and American university systems, and therefore traveled to Germany to gain a more extensive knowledge of the German educational system. Specifically, I focused on the successes and challenges presented by the Bologna reforms in Germany, reforms that aim to better standardize higher education and provide internationally accepted degrees. I am, in part, building upon the research already fulfilled on this topic by Notre Dame German professor Mark Roche. The new angle of my study, however, was the focus on preparation for and transition to a career, with the end goal of helping both German and American students better prepare for careers after their time at the university.

During my weeklong trip to Germany, I first flew and traveled to Berlin, Germany. During my time in Berlin, I was able to meet with Mr. Frank Petrikowski, who works in the International Exchange department at the Bundesministerium für Bildung und Forschung (Federal Ministry of Education and Research). The ministry is responsible for implementing education policy and regulations in Germany, and Mr. Petrikowski provided me with specific knowledge about how these policies compare and contrast with those of other countries. While I had a list of specific questions prepared ahead of time to guide our discussion, Mr. Petrikowski provided me even more additional informational about the Bologna reforms, as this is his area of expertise. He serves as Germany’s representative in the European Council during meetings regarding education, and therefore was able to better explain to me how the German educational system varies from that of other countries. Germany’s higher education system has proven to be exceptionally successful in the years following the Bologna reforms, as proven by statistics of Germany’s high career placement rates, low unemployment rates, and student satisfaction rates.

After this, I traveled to Erlangen, Germany, where I had another meeting, this time at the Friedrich-Alexander-Universität Erlangen-Nürnberg. At the university, I had the opportunity to meet with both staff members and students. I had a meeting with the staff of the Abteilung Qualitätsmanagement (The Quality Management Department), where I met with Mr. Tobias Schulz, a board member of the Zentrale Universitätsverwaltung - Abteilung Lehre und Studium (Central University Administration - Department of Teaching and Learning), and his colleagues to discuss the Bologna reforms and how they have affected students, the organization of the university and the career services offered by the university. The interview was conducted in German, but as a result of all of the extensive German coursework at Notre Dame, I was well-prepared for this and communication was not an issue. While the information I gained during this meeting was quite comprehensive, some highlights include information about the differences between the sizes of German and American classrooms, the differences in the curriculums, and the differences in the structures and layout of the campuses themselves. Another insight that I found especially interesting was that while German students at the university cited a high satisfaction rate with the education they received, the school lacked many of the “unifying” and “identifying” characteristics that are so common on campuses like Notre Dame, such as a school logo, school sports teams, a school or dorm mascots, etc. In addition, I was also able to sit in a lecture at the university that same day in order to gain a better first-hand understanding of the dynamics of the German classroom. The overall large number of students and lecture rather than interactive style of learning were among my most prominent observations.

These meetings were very informative and helpful in my research on the differences between the German and American university systems, and I will synthesize the information that I gathered into my European Studies capstone essay this semester. These interviews and interactions allowed me to gain knowledge for my work that is not otherwise attainable through my research here at Notre Dame. This research and these findings can be used to understand the distinctive advantages of the German and American universities, including the ways in which the two systems can learn form one another in order to improve employability and preparedness for students in their future careers.

I would like to acknowledge and thank the Nanovic Institute for European Studies, because without their generosity and grant that I received from them, this research and travel to Germany would not have been possible. I am truly grateful for this unforgettable experience.