Molly Geraghty is a Junior majoring in Science Preprofessional Studies and French and Francophone Studies.  The Nanovic Institute awarded Molly a Break Travel and Research Grant for Sophomores and Juniors to conduct research on the interactive nature of the Paris opera.  She traveled to Paris over fall break.  Molly recently wrote about her experience: 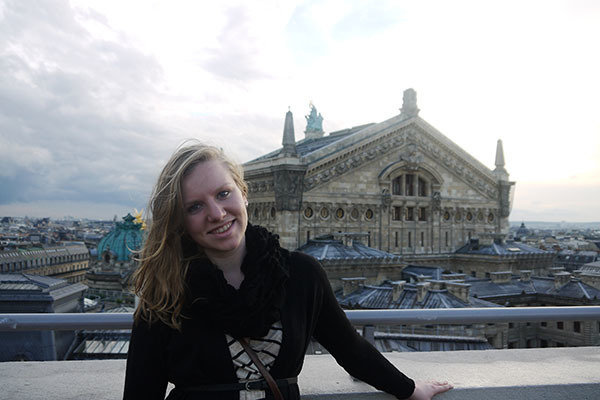 Perhaps I could have looked up some information on the Opéra Garnier from my dorm room, in the United States. I could have asked people their opinions of opera, or done some sociological research online on differences between French and American culture. However, I never could have experienced history firsthand like I was able to in Paris, and that powerful form of learning helped me to come to the conclusions I came to with my research.

The title of my project was “The Paris Opéra: An Interactive Experience,” a play on words, because it involved both the topic I was studying and the way I planned to do my research. I would not only conduct research in the beautiful Bibliothèque Historique de la Ville de Paris, reading primary sources dating back to the 19th century, finding notes from the authors themselves and old leaflets advertising publishing companies, but also in the home of my topic, the opera house of 19th century Paris: the Opéra Garnier. Although the case I planned to study, the failure of the opera Tannhaeuser at the Paris Opéra house in 1861 actually occurred in a different building, the Salle Le Peletier, the Opéra Garnier was what truly represented the ideas of Parisian society on the Opéra in the 19th century.

I spent my first day in the library, poring over the thin pages of primary sources in the studious silence of the reading room, constantly reminded by the chipping, painted, exposed wooden beams of the history contained there, in the books and in the building itself. The next day, I made my trip to the Opéra Garnier. I had booked a tour with an English-speaking tour guide so that I would be able to both understand everything said and clearly ask questions. I happened to have the perfect tour guide, Caroline, an art history student who had worked in museums both in France and in the United States. Her background had helped her form a unique perspective on the way that these two countries viewed and interacted with art.

I was able to talk to Caroline after the tour and ask her a couple questions about my topic of research: audience interaction in the history of the Paris Opéra. I already knew of two cases: one being the failure of Tannhaeuser at the Salle Le Peletier, the incident on which I was conducting literary analysis at the library, and the representation of the Phantom of the Opera in fiction, starting in the 19th century. I wondered if she would know of any other incidences like these, where people interrupted or interacted with the opera, and she certainly did. She told me there was once a man who played a radio through an entire opera. The radio was playing the opera that was being performed, but the timing was off by just a little. The audience became so enraged that they yelled and booed at this man. Apparently, the man had orchestrated the whole thing after learning the ways of the opera, perhaps as a large-scale social experiment. Another example had just occurred very recently, with an opera that had begun at the Opéra-Bastille only two weeks before my arrival in Paris. The opera was Aida, which is usually set in Egypt. However, the Paris production had changed things around, setting it instead in Italy, and in a very controversial historical period. This change had caused an uproar, with people booing and hissing to show their discontent and their disagreement with the setting! The idea of such a riotous display of dissatisfaction was something entirely new to me.

An idea that was not as new to me was the purpose behind the building of the Opéra Garnier. I had spent the summer in Paris through the study abroad program at Notre Dame, and one of our classes was a course on the architecture and art history of Paris. Through this course, I had learned that the Opéra Garnier was commissioned by Napoleon III and created by Charles Garnier to be a place where the people of France could come for a spectacle. However, that spectacle was not created by the performers in the opera, but by the upper class people of society themselves, who came to the Opera house. Everyone in Paris knew this, including Charles Garnier himself, and so he carefully instructed his masterpiece to put on display the people of Paris.

It was a place of grand public exhibition, filled with beauty and power, where people came to see and to be seen. It was a way for Parisians to climb the social ladder as they ascended the beautiful marble staircase that Garnier had so exquisitely shaped. People did not come to the Opéra Garnier to see an opera; they came to see the show happening outside of the theatre. The Opéra Garnier was built with those people in mind, and with the Paris Opéra as the official reason to create a newer, grander social arena where the real action, the real spectacle, could take place. Why, then, would the people of Paris lower themselves below the level of the performers or the director of the Opéra? The Opéra was there for them, and they knew it. This unspoken fact gave the audience the power at the Opéra: the power to interact, to voice their opinion, to shout their dismay. This, the Opéra house itself, was the missing piece to my puzzle.

Finally, I realized I had come full circle. The inspiration for my research project had been the unusual actions of the Phantom of the Opera, but now the story all made sense. What better place was there than this, an opera house built as a place for people to create a spectacle, for the Phantom to, himself, become a spectacle? The Phantom was just another Parisian among the many who had attempted to gain the fearful respect of his companions by making a grand performance at the Paris Opéra, a place that provides an interactive experience for everyone.