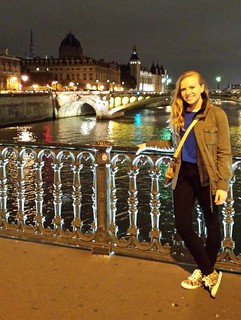 When planning a research trip, it is always best to plan carefully in order to assure that you can actually accomplish what you set out to do. When we review student grant proposals, we look for well-planned and well-defined trips. But you know what Robert Burns had to say about plans: "The best laid schemes o' mice an' men/ Gang aft agley" (translated from Scots as "The best laid plans of mice and men often go awry"). Undergraduate Molly Geraghty ('15) learned this well on her Nanovic-funded fall-break trip. Geraghty, a double-major in Science Pre-Professional Studies and French and Francophone Studies, arrived in Paris only to have her research plan derailed by an unexpected and unpublished construction project. She quickly adapted her plan, however, and spent her week in Paris doing excellent work! Read about her experience in her own words:

In writing my grant proposal for the Senior Fall Break Travel and Research Grant, I had prepared an agenda so I could get right to work on my first day in Paris. In doing so, I had looked up specific resources in the history library of Paris, the Bibliothèque Historique de la Ville de Paris (BHVP), where I planned on doing most of my research. However, Paris had different plans for my traveling companion and myself. Upon arriving at the BHVP, we found that it would be closed throughout the week for construction and repair, despite this notice not being listed on any websites relating to or linked with the BHVP, including those of the French government and the national library system. Instead of seeing this as a defeat, we chose to view it as an opportunity to explore other resources. I incorporated firsthand experiences, such as a tour of the Opéra Bastille and visiting the specialized library-museum of the national opera of France, the Bibliothèque-Musée de l’Opéra. As a result of this small roadblock, we were able to discover one of the most exciting truths about research: it is always changing, and researchers must constantly adapt to keep up with it as they find new resources and discover new ideas. The resources I found and used at the National Library of France, the Bibliothèque Nationale de France (BNF), led me down roads of discovery that I never would have come across if the BHVP hadn’t been closed. As an added bonus, I got to work inside the Opera Garnier itself, the illustrious edifice that served as a setting for the events in the Phantom of the Opera, the story that inspired my original research!

I found many stories in the library about people like myself who were faced with difficult circumstances and, in enduring their conditions, demonstrated the resiliency of the human spirit. Both the opera performers and the audience members had to adapt in order to endure the riotous and revolutionary atmosphere of the French Revolution. The research I did in Paris over fall break 2014 was a continuation of the trail of discoveries I began a year earlier during fall break of 2013, through another Travel and Research grant from the Nanovic Institute. Previously, I had studied two specific incidences of audience interaction at the Opera: the modern film adaptation of the fictional story of the Phantom of the Opera and the failed premiere of Richard Wagner’s opera Tannhaeuser at the National Opera of Paris in 1861. I had learned during my last visit to the Paris libraries that these incidences of audience interaction at the Paris Opera were not accidental coincidences but rather two instances of a greater historical trend. It seemed that the opera was used as a stage by far more than just the performers. This time around, I thought it would be interesting to expand my search and explore this tradition of audience interaction during revolutionary times, when the atmosphere of rebellion and independence would only support and encourage uprisings at the opera.

As it turned out, history can be just as entertaining as fiction. In one book at the BnF, I happened upon the record of an opera performance where the audience became so raucous that the opera house brought down the curtains to protect the performers and allow the excitement to fizzle out. Not content with being silenced, the members of the audience who were seated in the parterre area leapt onto the stage and proceeded to cut down the curtain with knives, swords and whatever other sharp objects they could get their hands on. Another source recounted the many times the opera was interrupted so that the performers could lead the opera house in rounds of revolutionary songs and speeches, at the request of certain enthusiastic and insistent to the point of threatening members of the audience. Another time, a few members of the Jacobin party almost succeeded in killing an actress after she openly displayed her loyalty to the Queen during a performance. These stories made the violent and drastic actions of the phantom in the Phantom of the Opera, my original inspiration for research, very reasonable and unsurprising! The BnF was a great place to work—the charged silence seemed to be filled with the thoughts, ideas and discoveries of those working there. However, the silent atmosphere proved to be challenging to maintain at times, as I suppressed giggles about some of the ridiculous antics and incredible occurrences that had taken place at the Paris Opera house!

My time in Paris showed me the dynamic nature of research, and the new discoveries that can come from adapting to a change in a plans or a difficult situation. I learned more about the topic of audience interaction, which I am currently developing into a thesis with the help of my research mentor, Professor Julia Douthwaite, and found some interesting stories that served as both support for my thesis and entertainment to help the long hours spent at the library pass by quickly. People have a remarkable ability to adapt in order to survive tough circumstances, and my time in Paris over fall break exploring the active role of the audience in the Paris Opera through times of struggle and oppression allowed me to both learn about that and experience it firsthand!