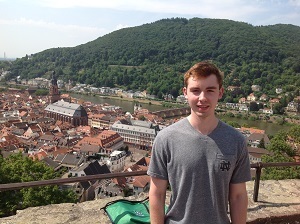 The story of a young man traveling far from home to find an elixir of gold seems like something straight out of a fairy tale, but it's the true story of Matthew O'Neill ('17). Matthew, a biochemistry major, received a European Internship and Service Grant to travel to Heidelberg to conduct laboratory research on gold catalysis. His research, which has resulted in a patent application and a potential publication, is impressive enough, but as Matthew notes, his character development was just as impressive. Matthew recently wrote to us about his experience:

My summer in Heidelberg, Germany influenced me in ways I previously could not have conceived. Embarking on the journey, I was largely unprepared for what lay ahead. I had never been to Europe before, nor had I ever truly lived on my own. Many times I struggled in my research lab and endured periods of loneliness. While adversity presented itself in many forms throughout the summer, I have never experienced such a period of life that was simultaneously so trying, yet immensely gratifying and edifying.

During my eleven weeks in Heidelberg, I spent most of my time in the lab of Professor Stephen Hashmi, a world-renowned expert in the field of gold chemistry. Indeed, in 2002 he published the first paper that utilized a homogenous gold catalyst. Since then, he has published nearly 400 papers, along with numerous patents and book chapters. My research primarily involved the synthesis of a group of gold N-heterocyclic carbene compounds. These molecules have recently shown potential as anticancer compounds through multiple mechanisms, such as a unique inhibition of the Trx enzyme found in mitochondria. It is hoped that these compounds will complement other organometallic drugs such as Cisplatin, a platinum based anticancer agent. My work should soon be submitted as part of a patent application in Germany.

My experience significantly helped my process of discerning my personal vocation. After graduation I am hoping to attend an MD PhD program so I can effectively combine my interests in clinical work and research. Research in Heidelberg was an excellent opportunity as it involved completing research that could hopefully be translated to the clinic in the form of an effective drug. Besides confirming this career aspiration, I now hope to return to Germany after graduation with support from either a Fulbright or DAAD fellowship. Heidelberg has the best medical school in Germany and also hosts the German Cancer Research Center as well as the European Molecular Biology Lab. My previous experience in Heidelberg will surely help me network with investigators at these remarkable institutions, and hopefully provide me with a chance to return.

When I left the Untied States, I didn’t expect to undergo such enormous character development. This part of the grant experience nearly overshadows my research achievements from my own perspective. While I was in Heidelberg, I met extraordinary people who I connected with on very many levels. I immediately found a friend group among the other German bachelor students and would spend time with them on weekends and nights after lab. Through our conversations I was able to learn a considerable amount of German, and also explore social issues completely unrelated to my research. My courses through the Glynn Family Honors Program have helped me appreciate the complementary role of the sciences and humanities, which placed these talks among one of the most salient parts of my trip. Additionally, I had time to pursue my own reading and discovered a priceless treasure in German and Russian literature.

Another fantastic part of the trip was experiencing daily life from a different perspective. Contrary to Notre Dame, I did not have everything available to me directly on campus. In Heidelberg, the various campuses are spread throughout the town. I lived in the north at the science campus, which was about a 15 minute bus ride from the beautiful, historic old town. Every day after lab I would take the bus or ride my bike to this “Altstadt” to get coffee and read. This served as a time to reflect upon the immense historical value of the city and the many factors that led to its current position today. Having a cup of coffee while looking up at the castle perched on the mountain above was an unbelievable experience, one that I was fortunate to encounter nearly every day. However, more difficult times complemented these positive experiences. I struggled in the beginning to adjust to some of the cultural changes in Germany. I struggled to accommodate the slower pace of life, and I expected to spend much more time in the lab completing my research. Sparkling water became an acquired taste, which I was forced to develop, as still water suffered a marked lack of popularity among the German people. While I had been very excited to finally live without a roommate, it quickly became lonely on nights after lab when I did not see the other bachelor students. In the kitchen I was forced to utilize my chemistry skills to learn how to cook.

In the end, this summer challenged me to consider new perspectives and grow as a person as I experienced life in Germany. I made substantial contributions to Professor Hashmi’s research program and will hopefully be a coauthor on a patent and subsequent publication. I grew as a person through the many friendships I developed and enjoyed the experience of European culture. In the future, I ardently hope I can return to Heidelberg to complete a year of research before attending medical school.