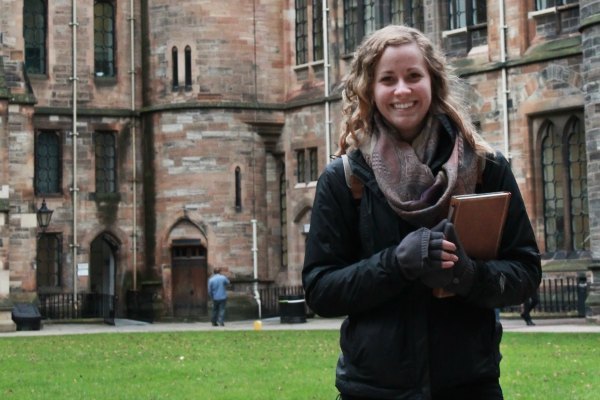 Marissa Geiser (‘16) is an Architecture major who received a Senior Travel and Research Grant to travel to the United Kingdom. While there, she retraced the roots of the Victorian movement in England and Scotland to better understand its underlying design principles and the way this beloved architectural character responded to the political and cultural atmosphere at the time of its rise to popularity. Marissa recently wrote to us about her experience:

Developed in the early 19th century, the term “Victorian” architecture refers to the reign of Queen Victoria of the United Kingdom of Great Britain from 1837 to 1901. Shortly following her reign, architects responded to the preceding strict symmetry of Palladianism and the introduction of steel technologies by designing more eclectic, asymmetrical compositions that often drew from a series of other historic precedents and styles. This style became known as Victorian and thrived throughout the United Kingdom. In preparation for an architectural thesis project designing a Victorian campus building, the aim of this research was to develop a better understanding of the style, and to create a pattern book of architectural elements employed in the Victorian movement.

The intent of this research was to fix a deficit of documentation of some of the greatest Victorian architectural works of the United Kingdom. There are streets filled with beautiful Victorian residences and commercial buildings which one simply cannot find in a textbook. By studying firsthand these smaller and less known sites, I was able to create a more comprehensive pattern book of design techniques and elements employed in the Victorian movement.

The Victorian movement is characterized by its eclectic nature. One cannot simply study a few famous Victorian buildings to understand the depth of the style. With each building studied, one can gain a greater understanding and a wider Victorian vocabulary to be employed in the future. It is tremendously important for architects to have an understanding of many styles – just because Victorian architecture is not my preferred style, doesn’t mean that I cannot learn valuable composition lessons from the movement. By studying a wide variety of building typologies that employ the style, I will be able to adapt the organization of the design to fit many different design challenges that I may face in the years to come.

The method of research used was on-site analysis, sketching, and documentation. At each site, I would sketch the main façades, significant details, and urban context of the building. Small massing studies were completed, as was substantial photographic documentation. A pattern book of elements and compositions was created to be used and drawn from in future designs.  Elements that were less successfully employed were analyzed and diagrammed in an effort to determine the underlying causes and methods that could be used to have made a more effective composition. Additional sketch analysis of successful Victorian buildings consisted of proportion studies, solid-void diagramming, bay rhythm analysis, and material notation.

In these analyses, I found that the Victorian movement, perhaps more than any other, is a dynamic and eclectic style.  Each city that was visited presented a new cultural context that the Victorian architect drew from, which created a fascinating dialogue and presented a wide breadth of details and elements to learn from. Perhaps one of the greatest lessons learned from the on-site analysis was the treatment of asymmetrical plans and elevations composition – one of the most compelling trademarks of Victorian architecture. This lesson can be applied in many design challenges, whether Victorian in character or not, to create buildings that are successful in both plan and elevation.

The lessons I have learned through my experience in the United Kingdom amidst some of the most successful Victorian architectural works have equipped me with the design skills to confidently and elegantly employ the many complicated design techniques of the Victorian movement. It is the hope that the findings of my research will be utilized to design a successful thesis project with Victorian character that is thoughtful, meaningful, and knowingly executed. By creating such a work, my design will contribute the ongoing dialogue about the Victorian movement – both in its role in history, but also the role it may play in the future.